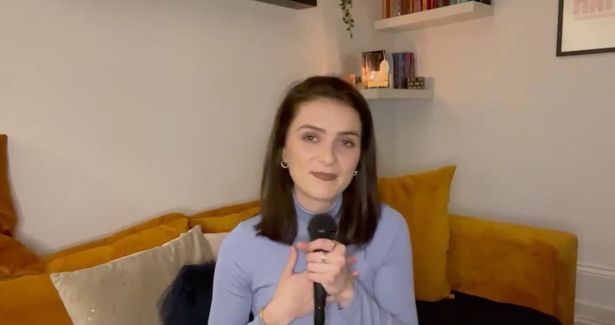 EMMERDALE star Chelsea Halfpenny has swapped her blonde hair for a sleek dark brown ‘do and it’s gone down a treat with her fans.

The actress and singer, 29, belted out a song to great fanfare on Twitter ahead of her virtual Leave A Light On convert.

Chelsea, played teen runaway Amy Wyatt between 2010 and 2013 in the ITV soap, sounded great as she sang in her living room.

She wore pale blue roll-neck and a dark matte brown lipstick for a sophisticated look.

One follower wrote: “You are so very beautiful xx.”

Another commented: “So beautiful. Your voice and you!!!!”

She was previously blonde

A third shared: “This is STUNNING Chelsea!”

She made her debut in the medical drama in 2015 for an initial eight-episode run, but after impressing she returned the following year and remained as a regular until January 2019.

Chelsea, whose aunt is actress Jill Halfpenny, then went on to star in the West End as Judy in Dolly Parton show 9 to 5: The Musical. She starred as Amy Wyatt in Emmerdale

She previously said of her decision to quit Emmerdale: “At the time I was only 22 and weighing up my options and considering advice I realised I wanted to try other jobs.

“I left while I was really enjoying myself and have it as an amazing memory. I still talk to everybody there and I do miss it. But I think I made the right decision.

“When I did Casualty it reminded me I’d left because I wanted to do other things.”

Brits are today braced for a ‘Groundhog Year’ of high taxes, energy bills and...