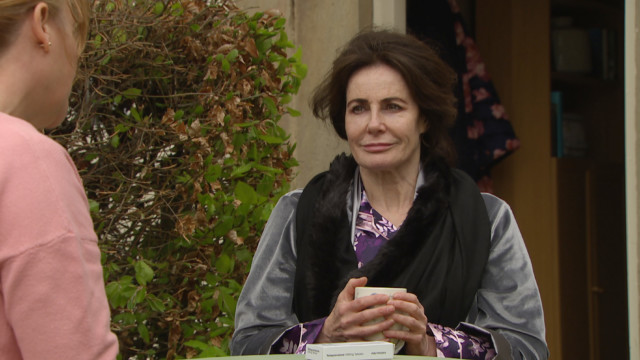 Actress Sally Dexter confirmed the exit storyline and reflected on her time in Emmerdale. The actress reflected on her time in the Dales

But as spoilers and bosses have teased, her on-screen alter ego will find out her cancer has spread and will accept her death sentence by refusing anymore chemotherapy.

This means Faith is set for an emotional exit from the eponymous village after five years – and Sally has confirmed the storyline will be her very last.

Recently speaking to TV Times about her character’s turmoil, Sally sad she’s “hurtling towards the end” of her stint in the ITV program.

While she has accepted her exit, Sally can’t hide her pain at leaving some of her co-stars behind, all of which portrayed members of her family on screens.

“Even though I think it’s the right thing, it’s quite devastating because I’m going to leave behind people I really care about, like Jeff [Hordley], Lucy [Pargeter] and Natalie [J Robb].”

“It’s extraordinary to be working with them. I don’t just mean their acting abilities, but them as human beings.”

Sally added: “I think [the storyline] is excellent. I haven’t read the scripts for her death, but I’m hoping it’s as positive as it can be. This isn’t just a story about a cancer; it’s a wider story about family.”

“That great thing about death is the thing that happens before it, that thing called life, and all the love that goes with it. I’d love it if everyone watching had a little bottle of gin, to toast her!”

The actress then promised her character will have “a few madcap” schemes in store until she gets the help from her great-granddaughter Sarah who will teach her to take pleasure in the smaller things in life.

“That’s a big learning curve for Faith. She looks at her world in a more appreciative way, and there’s one very special moment between her and Cain.”

How will it pan out? This week, Faith finds out her cancer has spread And her family have to accept her fate