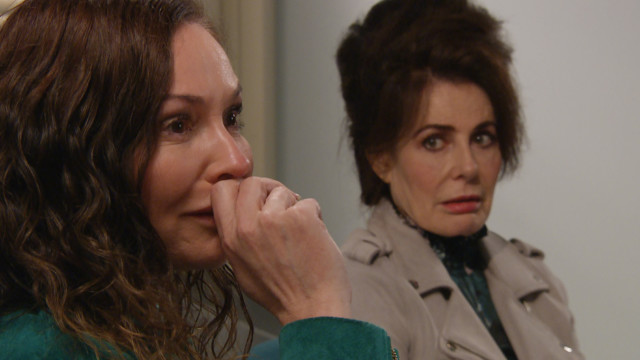 But Emmerdale actress Sally Dexter doesn’t have long left in the show as her character finds out she will die from her illness. During an explosive birthday row at The Woolpack, Faith Dingle revealed to her family she had been diagnosed weeks prior with breast cancer.

Tensions arose, notably as her daughter Chas (portrayed by Lucy Pargeter) couldn’t stand the fact Moira (Natalie J. Robb) knew all about her condition and kept it a secret.

However, the pub manager has to step up to the plate and support her mother, while her brother Cain (Jeff Hordley) remains stoic, too hurt by his past with Faith.

The village tough man may have a change of heart as Faith is set to be told her fight with cancer will be her final one. far from the village Next week, Faith is preparing herself for her scan and Cain decides to pile up the drinks in the Woolpack instead of supporting her, despite his wife Moira asking him to change his behaviour.

Chas is furious to learn Cain isn’t making any efforts and pleads with him to support Faith – but nothing seems to be pushing him to reach out.

Later on, Chas is filled with dread when Faith gets a call from the doctors who want to discuss her scan results.

All hope is lost during the oncology appointment as Faith is told her cancer has spread.

Chas breaks down in tears, knowing her mother won’t make it.

But her pain only grows when Faith insists she won’t be having anymore chemotherapy and remains firm in her decision.

Understandably, Chas is heartbroken to see her mother accepting her demise but she’s even more unsettled by Cain’s indifference over Faith’s decision.

She turns to Al Chapman (Michael Wildman) to distract herself from her problems as the pair have embarked on an affair in the wake of Faith’s cancer announcement.

Meanwhile, Moira tries to talk some sense into Cain, telling him he will regret not reaching out to his mother.

Seemingly unfazed, Cain eventually has a change of heart and asks Chas for a chat.

The pair have a poignant conversation about Faith, while she tells her friends about her decision.

Faith is also in a reflective mood as she shares her regrets about her relationship with Cain.

Cain, on the other hand, goes over his traumatic memories with Chas and talks about the damage his mother inflicted on him.

With her sassy and bold character ready to die from her illness, actress Sally Dexter is set for an emotional final exit from Emmerdale.

Sally has portrayed the bold and sassy character since 2017. How will her exit pan out? Faith is told she won’t have long to live Did you miss our previous article…
https://www.hellofaread.com/soap-opera/eastenders-spoilers-phil-mitchell-brutally-attacked-in-prison-as-shock-enemy-vows-to-kill-him/

Im A Celebrity viewers beg Medic Bob to keep an eye on Adele after...

Britain won’t follow US with travel ban or school closures to stop spread of...