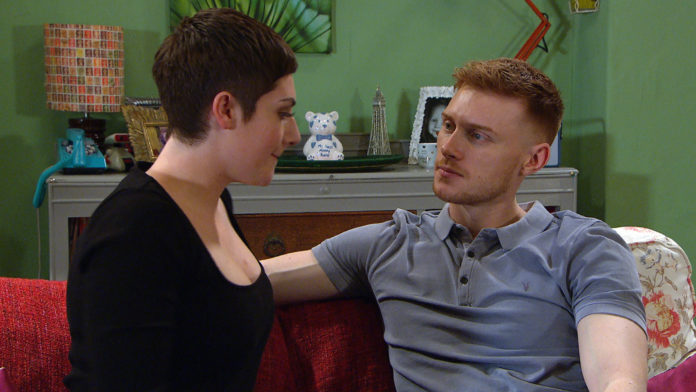 VICTORIA Sugden immediately regrets her decision to sleep with Luke Posner next week in Emmerdale.

Vic was raped by Luke’s brother Lee last year during a night out, and has been suffering from harrowing flashbacks in recent weeks as she takes her relationship with the chef to the next level.

What do we know about Luke and Victoria’s relationship so far in Emmerdale?

Emmerdale viewers were horrified when Vic’s new love interest turned out to be the brother of her rapist at the end of last year.

They were quick to cool things off when they realised the unfortunate connection.

But it seemed their romance was written in the stars as they grew closer and closer after the Posners moved into the village.

Luke wasted little time in romancing Vic and insisting love can conquer all.

However, the love birds went through a temporary break-up after Luke caused Vic to suffer a nasty flashback of his rapist brother when they were together.

Luke was devastated when Vic said she just wanted to be friends and fought for the relationship, and they’ve since decided to give things another go.

Why does Victoria regret sleeping with Luke in Emmerdale?

Official spoilers have revealed that Victoria and Luke will end up spending the night together after she invites him for an early night with her.

The next day, Luke bounds around and is clearly on cloud nine.

But when he notices that Victoria is acting awkwardly, he asks her what’s wrong.

Fans will have to tune in to find out her reasons for regretting the decision to sleep with Luke, as Emmerdale are yet to give away too many details.

Are Luke and Aaron going to have an affair in Emmerdale?

Fans have been convinced that Luke and Aaron are going to hit it off after noticing chemistry between the pair.

And viewers became certain that a romance between the boys was on the cards when Aaron bumped into Luke at a gay bar in Leeds.

But Emmerdale are yet to confirm a romance storyline for the pair and fans will have to tune in to find out.

Actor Max Parker has thrown his support behind the fan theory, labelling it fun, but admitted that his character only has eyes for Victoria at the moment.

He told the Sun Online: “I think the idea is fun but I think what the fans want to see is very different and I see a lot of things online with people are like NO and then some with YES.

“I just think that at the minute Luke has only got eyes for Victoria and I think a lot of time in episodes in soaps people that hate each other and have a feud, people are always going to speculate about whether they actually like each other and stuff. But I don’t think so.”

Max added that Luke will never show a dark side like his brother, but that there is a part of him that’s “broken”.

Max said: “Well I don’t know. What I personally think is that Luke is very, I relate him a lot to myself.

“He’s very assured, he’s very cheeky in a showman, but there’s definitely some cogs broken inside and it doesn’t necessarily mean he’s going to be a bad guy, but it means that he needs something.

“He needs someone like Victoria, if he needs purpose or if he needs to be fighting for to be the favourite child. I don’t think you’ve seen all sides of Luke just yet.”

Ten per cent pay hike could be offered in a bid to reach deal...