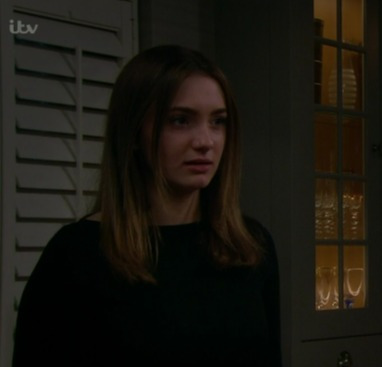 EMMERDALE viewers were left cringing tonight over teen Gabby Thomas and vet Jamie Tate’s flirting before they headed upstairs to have sex.

Out of nowhere, the pair had a late night boozy heart to heart after a very tense day at Home Farm.

Gabby told Jamie she found him attractive in tonight’s Emmerdale

They both admitted to finding the other attractive and things escalated rapidly after that.

As Jamie drowned his sorrows after disappointing mum Kim and almost accidentally burning Moira’s son Kyle alive in a barn, Gabby went on a charm offensive.

She said: “What I’m seeing is a caring, educated, extremely handsome man, who I’d like to get to know better.

As she left to go, she added: “I’ve probably said too much.”

A rare compliment perked Jamie up, and he replied: “No stay.”

Jamie was drowning his sorrows before Gabby came on to him

Earlier Gabby demanded Moira stop waving her shotgun at Jamie and Kim in retaliation for the former putting Kyle in danger.

Jamie continued: “That’s why you stood up to Moira, because you fancied me?”

But Jamie insisted: “The last few weeks I have. I’ve got eyes. You’re gorgeous, you know that.”

It prompted Gabby to say: “Why don’t we take this somewhere more private?” Jamie was threatened at gunpoint by Moira

Viewers found it hard to stomach, with one writing on Twitter: “Pass me a bowl.”

Another posted: “Gabby and Jamie, oh god no!”

As a third said: “Ok well that literally came out of no where with Gabby and Jamie. Like WTF.”

It comes after it was revealed Gabby will fall pregnant with Jamie’s baby in an explosive storyline.

The teenager – who is played by actress Rosie Bentham in the ITV soap – will has a passionate one night stand with the millionaire and ends up expecting his baby. Story producer Sophie Roper teased: “Tracy and Nate’s due date approaches as we head to the birth.

“As they adapt to being new parents it will be a real test, pushing them to the limit and Tracy will take the lion’s share.

“It will also put a spotlight on Nate and Cain. Will they finally bury the hatchet? There’s some really emotional stuff.

“The pitter patter of tiny feet isn’t just for Tracy – we have another new arrival as Jamie learns that he is going to be a father for a second time after a night with Gabby.

“As Kim discovers a new heir to the throne, a fight for power will ensue.

“Gabby will find herself at the centre – will she succumb to the temptations and manipulation at Home Farm?” Will Gabby go through with the pregnancy? Paul has been abusing Vinny behind Mandy’s back

She said: “We’ve made no secret that Mandy/Vinny/Paul will feature heavily and Paul’s appalling behaviour gets worse and worse.

“He goes to extreme measures. As he becomes better at hiding it, Mandy falls in love more and a proposal follows – a big old Dingle wedding is planned.

“But will it get them their happily ever after? It’s going in a really big direction, it’s our most ambitious work since Covid hit, it will be epic and rewarding.

“Ultimately this story will end in tragedy for a character but for who?” There are also some tense times ahead for Jimmy and Nicola

Laura added: “Jimmy and Nicola will cross into that in a shocking way.

“They will be watched by someone and Carl goes missing but who has taken him?

“There are massive betrayals of trust and lives are changed forever. It starts small but it is the biggest test to their marriage.”

Did you miss our previous article…
https://www.hellofaread.com/soap-opera/eastenders-fans-fear-lucas-has-killed-off-denise-as-chelsea-finds-her-necklace-in-trashed-home/

Coronation Street: Debbie Webster’s return explained as she vows to split up Kevin and...

Love Island viewers are stunned as Erin reveals she doesn’t know what a cucumber...

Brits holding their breath as Boris Johnson warns he could slap Covid restrictions on...

I’m A Celebrity fans are all saying the same thing about Naughty Boy as...