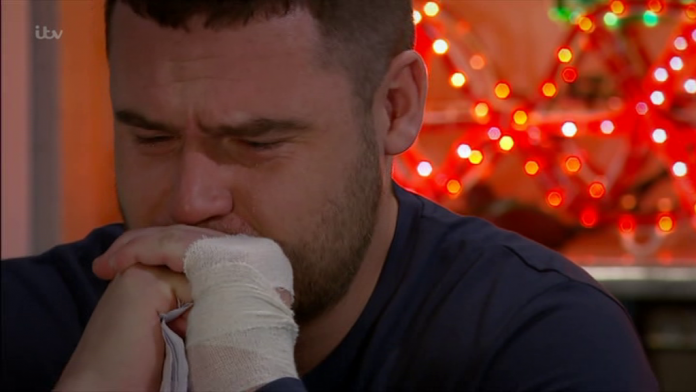 EMMERDALE’S Aaron Dingle broke down in tears after a seedy daylight romp with a stranger as he desperately tried to move on from husband Robert Sugden.

Fans were left devastated by the emotional scenes, with the character bringing home a random man from a bar for a quickie in the middle of the afternoon.

Earlier in the episode, Aaron [Danny Miller] had admitted that it was time to “move forward” after he read a letter that Robert had sent from prison only to find he’d not mentioned him at all.

Robert was imprisoned earlier this year for murdering the man who raped his sister Victoria, dumping Aaron from behind bars.

Viewers were shocked in tonight’s episode of the ITV soap when Aaron brought an unknown man home – and seemed eager to get him up to the bedroom.

The character said: “I usually have a drink first, you dragged me away before I could neck my pint at the bar.”

Aaron grabbed some cans of beer from the kitchen and lead the man upstairs, refusing to tell him his name during the casual encounter.

The downtrodden character was next seen coming back down again, with the man offering to hang out only for Aaron to tell him to leave.

The stranger then spotted a World’s Best Husband mug and seethed: “That’s what does it for you, is it? The risk of him coming in?

“You need sex with some randomer because your marriage is so boring.

“If you’re looking for a hook-up, there’s an app for that.

“I feel sorry for you mate.”

Fans were left devastated as Aaron then kicked the man out of his home before sobbing at the kitchen table while scrunching up the prison letter from Robert.

Taking to Twitter, one viewer wrote: “That was hard to watch. Aaron absolutely heartbroken to resort to this so quickly.”

Another added: “Poor Aaron, I just want him to be happy.”

A third said: “I can’t stop crying, Emmerdale is cancelled forever after this.”

Coronation Street’s Andy Whyment celebrates 20 years on the soap as Kirk as co-stars...