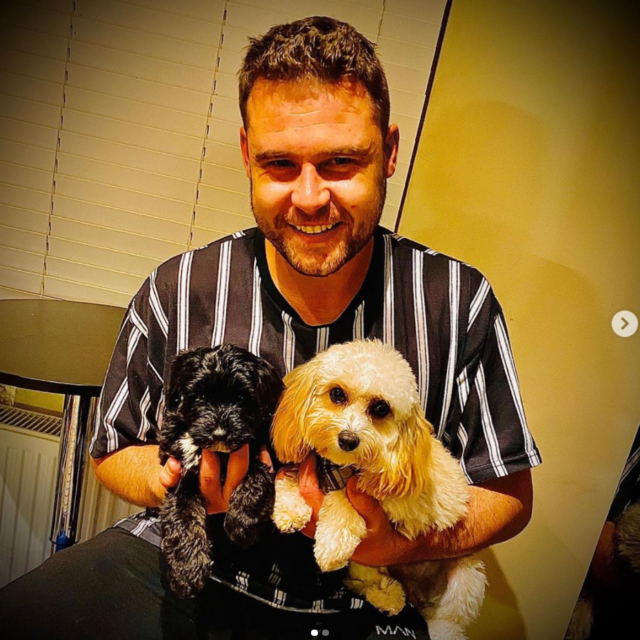 Danny, 29, introduced the newest addition of his family to his 418,000 Instagram followers last night with a set of adorable photos of them bonding.

The fluffy cavapoo pop snuggled up to its new pal Gini in the snaps and Danny was left grinning from ear to ear as he posed with them in his arms.

He captioned his photos: “Arise King Kenny. Welcome to the famalam.”

The actor’s fans adored the uplifting pictures and thanked the star beneath the post. Gini wraps her arms around Kenny who cuddles up to her

Another went on to add: “What a gorgeous pair of pooches.”

Danny welcomed Gini to his family in April during the coronavirus lockdown and the pup is now six months old.

He wrote on Instagram at the time: “The newest member of The Miller Famalam, meet… GINI” Danny poses with Gini snuggled into his jumper

“Can’t make empty promises, Gini but one thing I will promise is.. #youllneverwalkalone.”

Danny is also a doting uncle and the Emmerdale actor often shares snaps with his neices and nephews.

The hunky actor looked the picture of domestic bliss as he relaxed on the bed with his beautiful family around him. Resting on the bed, the soap star had all the kids relaxed and sorted with his niece, Kaitlin, her brothers, Bobby Vincent, and Teddy-Rae Stratton, and newest addition to the household, Gini the cockapoo.

The doting uncle managed to mind all three children and even feed little Teddy at the same time. Danny’s character in Emmerdale has been struggling lately

Danny’s settled family life is a far cry from his onscreen persona of Aaron Dingle.

His character has left the Dales after boyfriend Robert went to prison for manslaughter and heartlessly dumped him from behind bars.

Chancellor pledges to save Britain’s struggling small businesses from being destroyed by the coronavirus...

Prince William is a guest at his ex-girlfriend’s wedding and parties with pals after...

Even Gavin Williamson’s own wife is pushing him ‘every day’ to reopen schools as...