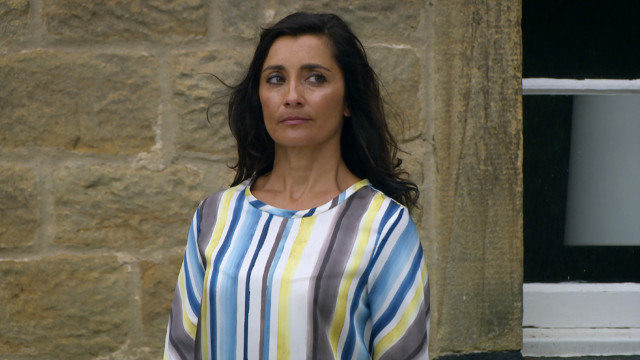 EMMERDALE’S Manpreet Sharma was in shock tonight as her sister Meena turned up and exposed her lies.

The doctor – who is played by actress Rebecca Sarker in the ITV soap – had never told her husband or his family that she had a sister and Meena’s appearance in the village proved it.

Earlier in the episode Meena found herself being knocked over after Dawn hurled a giant pepper mill at her.

She screamed in agony as Rishi rushed in and put Dawn in her place for attacking a customer.

And as his wife walked in, Rishi asked her to look over the injured woman – but hhe was left shocked when she recognised her sister.

And it was clear she had never told husband Rishi about the existence of her sister. Meena made a dramatic arrival in tonight’s episode Manpreet had never told husband Rishi about her sister

Instead she just looked shocked and asked: “What the hell are you doing here?”

While Rishi expressed shock at Manpreet having a sister, she wasted no time in kicking her out.

And fans were intrigued at why Manpreet would hate her sister so much.

A second said: “I wonder what the backstory is between Meena and Manpreet. I wonder why they had beef years ago. I’m intrigued by this storyline.”

Another added: “Manpreet doesn’t exactly look over the moon at being reunited with her Long Lost Sister though she?”

Emmerdale spoilers: Amelia Spencer kisses Noah Dingle as he takes her to her baby...

I’m A Celebrity bosses plotted to turn camp ‘nasty’ and gave one star a...