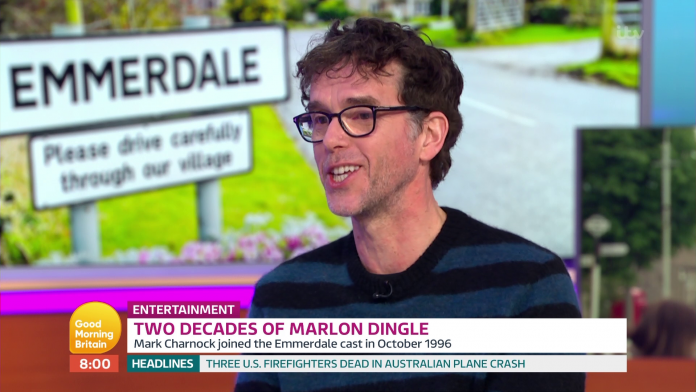 The dales star joined Good Morning Britain today and revealed desperate Marlon is pushed to the edge, with a “huge reveal” taking place at the end of the episode.

Mark, 51, said: “The revelations tonight, the audience will go ‘oh my god’ like they’ll be watching it through their fingers.

“Marlon feels helpless … They’re going to take Leo away and he’s been there before.

“Tonight is one of the very big reveals, there is a big reveal at the end of tonight’s episode.”

When asked if Marlon is the killer, the actor replied: “It’s a valid suspicion.”

During his chat, GMB aired a teaser clip of tonight’s episode that reveals Marlon is spitting mad and confronts Graham.

He loses his rag and threatens to wack him with a torch – and Graham is visibly shaken.

Viewers have already watched flash-forward scenes that show Graham thrown over a bridge and being attacked.

And many believe all seven suspects murdered Graham after a flash-forward scene saw him pushed off a bridge.

Emmerdale’s Graham is killed in a brutal attack

The dales hardman – who is played by actor Andrew Scarborough in the ITV soap – is being murdered ina special week of episodes this week but fans have noticed something strange.

In the three flashbacks so far Graham appears to have been murdered in different ways – hit over the head and then thrown off a bridge – and they think it points to multiple suspects being responsible.

They have likened it to the famous Agatha Christie mystery Murder on the Orient Express where everyone is guilty.

A second said: “Is it a groupvillage murder? Everyone played a part? #Emmerdale wonderful acting by Graham giving a verbal to charity tonight”.

GTA 6 release date, news and rumours – EVERYTHING we know so far

The Queen has an ‘exact’ place for everything, and will be ‘bloody angry’ if...

Calls for Britain to get an extra bank holiday around October half-term after lockdown...