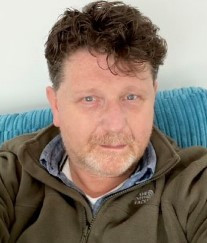 The 61-year-old admitted his secret to trimming down was giving up crisps for ten weeks.

“Amazing what ten weeks’ rest and recuperation (and far fewer crisps) can do for you,” he told fans.

And revealing he’s returning to Emmerdale despite his on-screen death, Reece added: “Start shooting on Monday and I’m ready for the fray.”

The gambling addict died on his wedding day after being hit by Jimmy King’s van, crushed under a falling barn beam and caught up in an explosion.

But Reece admits he hasn’t watched himself back because of his secret struggle with body dysmorphia.

He previously said: “In my life I have never been comfortable after things that were said when I was young.

“I would always look at myself as twice the size I am. It has been the bane of my life. But I work with that. He updated fans on his weight loss The star is returning to work as a director on Emmerdale

Reece will be back on the soap in just weeks – but on the other side of the camera.

He told fans: “I was actually directing on Emmerdale when I was asked, right out of the blue, if I would like to play Paul.

“I’m delighted to announce, therefore, that I shall begin directing once again on the show in a couple of weeks time. I’m the cat that got the cream!”

Olivia Attwood breaks down in tears with fiancé Bradley’s mum after having a lump...