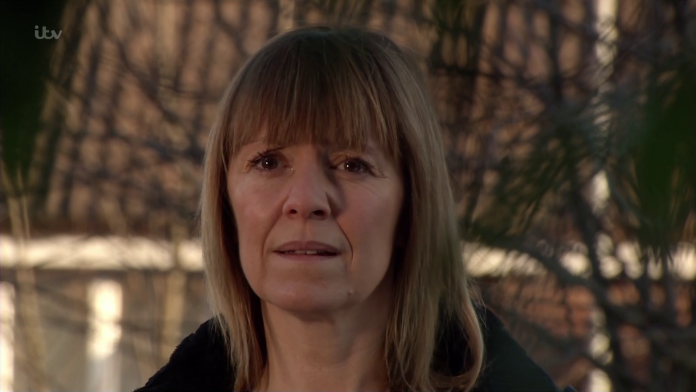 EMMERDALE was filled with high drama tonight as Rhona Goskirk was seen struggling to come to terms over Graham Foster’s death and went in search of answers.

After rifling through the pockets of his old jacket, she found an address which brought her closer to finding murderer Pierce Harris.

After visiting Marlon in prison and finally understanding that he is innocent, Rhona is now determined to clear his name.

She began to look through Graham’s things in the desperate hope of finding clues that will bring her closer to finding Graham’s killer.

Things started to click for Rhona when she found a receipt in Graham’s pocket with his blood on it.

She then remembered the former businessman had cut his hand and the receipt Rhona had found was for antiseptic wipes – but she is convinced Graham may have got in a fight and believes this may have something to do with his murder.

Rhona was starting to get somewhere as she found another piece of paper scrunched up with the receipt, which had an address on it.

The vet now believes whoever lives at the address knows what happened on that day and went to track them down and find out who killed Graham.

Despite best friend Vanessa pleading with her to go to the address she had found, Rhona snuck out of her house and began the very dangerous mission of finding her lover’s killer.

Upon arrival, Rhona entered the dingy flat and started searching around looking for clues when she was greeted by a menacing-looking man.

When Rhona asked the man, whose name was Trevor Stockfield, if he knew Graham Foster, he denied it before yelling at Rhona to get out of the flat.

Back in the village Rhona informed Paddy, Chas and Vanessa what had happened, but they still did not think Rhona had found anything concrete in relation to Graham’s murder and couldn’t believe she put herself in danger.

Running out of ideas, Rhona now suspects it was Kim who murdered Graham, especially as she hated her husband with a passion before his death.

The episode ended back at the flat, Pierce had just returned home and Trevor, who may be Pierce’s flatmate, told him a women had come round looking for Graham.

Pierce smiled, knowing exactly who he was talking about and figured that it would bring him closer to his ex, saying “soon we’ll be together again.”

Queen Elizabeth news: Her Majesty IGNORES Harry’s promises to ‘protect her’ as she ‘looks...