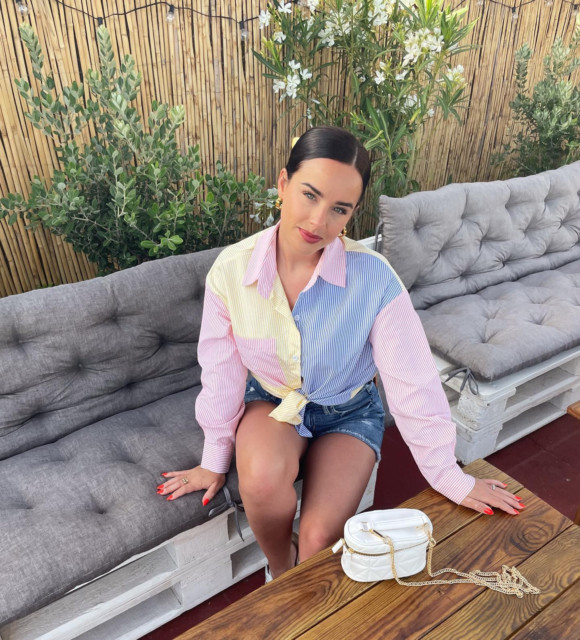 The actress – who played Katy Armstrong on the ITV soap – proudly showed the patches across her skin and said she’s found the “beauty” in it.

The TV star, 30, said she is developing “new spots” all the time on parts of her skin including her hands.

Sharing a photo of the discolouration, she sported a multicoloured striped shirt with denim shorts and bravely wrote: “Many of you have mentioned I have burnt whilst on this holiday. Well it’s a first time for me, but here’s why,” Georgia told fans.

“Two years on and a final diagnosis from a dermatologist I now know I have something else, Vitiligo.”

Georgia explained that the “saddest” part of her diagnosis is that there is “no cure”.

READ MORE ON GEORGIA MAY FOOTE “As you can see the pigment on my skin has disappeared,” she continued.

“The reason for this happening is still unknown although there are a few factors they think cause it. The saddest part? There is no cure.”

She continued: “I’m still me I just have funky skin now. Like my partner says ‘You either let it crumble you or you crack on’, social media makes you feel imperfect far too much.

“But this is me and I can’t change it. And I hope people who meet people with Vitiligo understand how it can make you feel and find the beauty in it.”

Vitiligo is caused by the lack of a skin pigment called melanin.

Non-segmental vitiligo, the most common type of vitiligo, is thought to be an autoimmune condition.

This means that your immune system – the body’s natural defence system – does not work properly.

Famous sufferers of the skin condition include the model Winnie Harlow and Towie’s Demi Sims.

It comes after Georgia announced her engagement to her boyfriend Kris Evans last December.

She beamed as she flashed her sparkling ring beside her fiancé as they enjoyed their sunny holiday abroad.

“Of course I am still crying

Last year Georgia called her man “the love of my life”.

She wrote on social media: “I genuinely feel beyond lucky you are mine. I had the BEST time with you yesterday for your birthday @krisevansmusic couldn’t love you more if I tried.”

The music producer used to be part of boyband The Mend and reached the Britain’s Got Talent live finals in 2011.

The group supported Little Mix on tour two years later, but their debut single Where You Are failed to crack the UK top 40.

Georgia is best known for playing Katy Armstrong in Corrie for five years between 2010 and 2015.

The year she left the soap she finished runner-up on Strictly with Giovanni Pernice, who she went on to date.

Her latest role is in sci-fi drama We Are Not Alone.

We Are Not Alone will imagine the trajectory of Earth six weeks after an alien race called the Gu’un conquer the planet. The story is set to unfold primarily from the perspective of Stewart, the Gu’un’s official human liaison, who’s tasked with winning over the world’s population as they bow down to their new alien overlords.

The twist? Stewart is actually a member of the human resistance who’s both navigating a romance with Georgia’s character Elodie and trying to avoid being found out by his alien housemate Greggs. Georgia said she is developing ‘new spots all the time’ Georgia said the ‘saddest part’ is that there is ‘no cure’

EastEnders spoilers: Suki Panesar exposed for selling out of date food as she catches...

Ananda Holden rages at her ‘pig’ husband after ‘catching him in the act’ raiding...