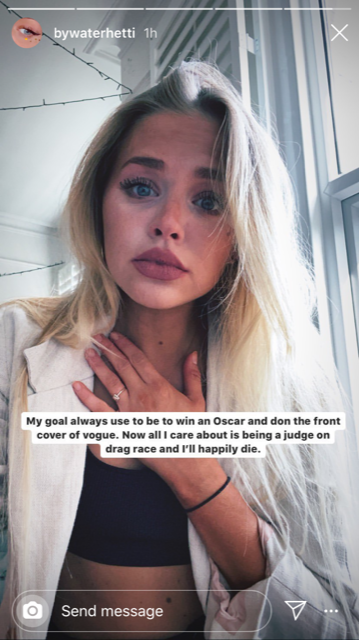 EX EASTENDERS star Hetti Bywater has shared her life goal of “winning an Oscar and being on the cover of Vogue”.

The 25-year-old star candidly opened up about her dreams as she joked she’d sacrifice them both if she could be a judge on Ru Pauls’ Drag Race.

Taking to her popular Instagram page yesterday, the blonde beauty shared a stunning photo of herself with her hand to her chest.

The tongue-in-cheek caption read: “My goal always used to be to win an Oscar and don the front cover of Vogue.

“Now all I care about is being a judge on Drag Race and I’ll happily die.”

Hetti is an avid Drag Race fan and tonight shared a video of herself crying while watching an episode of the reality show in bed. The show, which has US and UK series, follows a group of drag queens as they battle it out to become the next top drag superstar, with Ru Paul and Michelle Visage two of the main judges on both versions.

However, each episode has a new celebrity guest join the panel as a judge – with everybody from Whoopi Goldberg to Little Mix’s Jade Thirlwall appearing over the years.

Hetti shot to fame playing Ian Beale’s daughter Lucy in BBC One soap EastEnders back in 2012, becoming the fourth actress to take on the role. She shot to fame as Lucy Beale in EastEnders The actress is popular on social media

She was famously at the centre of a huge whodunnit, with the Who Killed Lucy Beale? storyline gripping viewers back in 2014.

Lately, she has become something of an Instagram star, racking up almost 100,000 followers with stunning selfies, glam photoshoots, as well as social commentary on issues such as feminism and Black Lives Matter.

Hetti also has a popular TikTok account, which has seen her perform sassy dance routines to entertain her fans.

ITV extend I’m A Celebrity to movie-length tonight to cram in all the drama...

Boris Johnson ‘compared being PM to pulling a jumbo jet down a runway every...

Five spoilers the Emmerdale Christmas trailer gives away including Grahams murder mystery and...