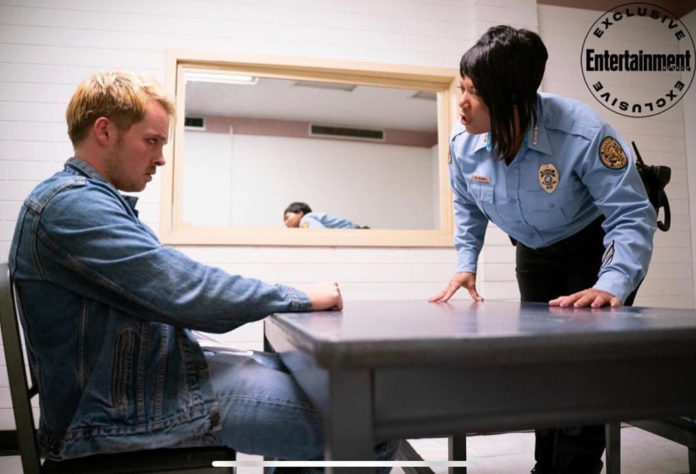 The actor – who played Johnny Carter in the BBC soap – will appear in When the Streetlights Go On from new streaming service Quibi.

He stars opposite Queen Latifah in the series

EW describes the series as: “When a beautiful young girl is killed, her sister and high school peers struggle to retain a sense of normalcy as their suburban community reels and the murder investigation proceeds.

The 25-year-old star was the first actor to take on the role of Danny Dyer’s onscreen son, winning praise at the time for Johnny’s emotional coming out scene to dad Mick.

He made his first appearance in ‘Enders on Boxing Day 2013, but announced his departure from the programme less than a year later.

Sam’s final scene in Walford was shown in December 2014, with Waterloo Road star Ted Reilly taking over the role in April 2016.

Earlier today, Sam shared an arty black and white snap of himself squinting at the camera while puffing on a cigarette.

Dressed in a checked shirt over a white T-Shirt, with a gold chain around his neck and hair messily styled, he is a far cry from his Albert Square alter ego.

Another photo shows Sam wearing a grungey denim jacket, smouldering as he looks into the mirror with a stern look on his face.

One more has some of the actor’s body art on display, with Sam once again furrowing his brows as he stares at the camera while tattoos peek out of his T-Shirt sleeves.

Throughout his Instagram account, Sam can be seen swearing and gurning at the camera, smoking, and even getting inked.

His Instagram bio simply reads “Fespian” [sic] with a series of skull emojis.

Since leaving EastEnders, the Essex-born star landed a role in Leatherface, a prequel The Texas Chain Saw Massacre.

Sam has also had guest parts in popular US television series Timeless and Mindhunter, as well as a lead role in Nightflyers.

Earlier this year, it was announced that he had bagged himself a huge Hollywood role as the lead in Stephen King’s Dark Tower TV series.

Sam previously dated his EastEnders’ co-star’s daughter, Dani Dyer – and even begged her not to go on Love Island last year.

UK weather: 29C scorcher to hit today… and it’s only going to get HOTTER...

Strictly’s Giovanni Pernice will dance to romantic song about falling for someone at work...