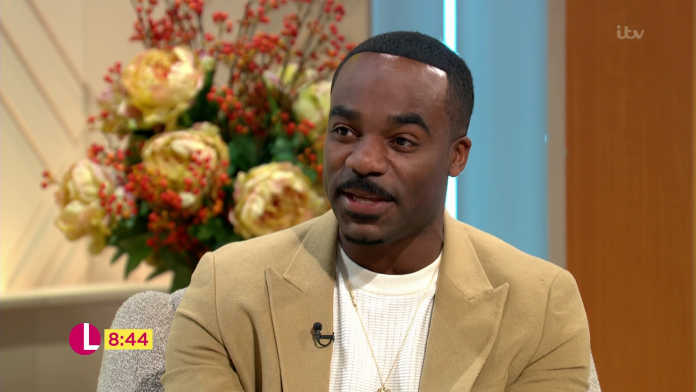 The 34-year-old presenter lifted the coveted trophy back in 2016 and said he has spotted a fellow winner in ex Emmerdale star Kelvin.

When asked who will be crowned champion of the 2019 series, Ore told ITV’s Lorraine on Wednesday: “You can’t keep your eyes off Oti and Kelvin.

“They are great … and the fact he wasn’t on the show and took over from Jamie, then has been like a rocket ever since.”

The pair dazzled with their jive on Saturday, which saw them bag 39 points from the judges – and joint first place on the leaderboard, alongside Karim and Amy Dowden.

“I don’t know where to start but I do want to mention your flicks and your kicks, contra body, opposite arm to foot all the way through.

“Your coordination was superb, that’s all I can say about that. You mixed your swing, you had some jive, you had great action.”

And Kelvin’s routine was so sexy it had judge Motsi speaking German by accident.

The former Emmerdale man shook his snake hips, leaving Motsi flustered, as she tried to critique his dance.

Motsi became tongue-tied and accidentally spoke the different language, prompting her to say: “I’m speaking German man, you killed me. Well done, that was out of this world!”

So its official… Just revealed on @lorraine Im gonna be rejoining the cast of @MusicalCurtains from January 6th 2020 to make my WEST END DEBUT!!!!! And with this amazing bunch of people, I cant tell you how excited. Dream come true

Meanwhile, Ore announced on Lorraine on Wednesday that he is set to make his West End debut next year starring in Curtains the Musical with Jason Manford and Carley Stenson.

Ore said his new role is “a dream come true” as he shared the news on Twitter.

He said: “Im gonna be rejoining the cast of @MusicalCurtains from January 6th 2020 to make my WEST END DEBUT!!!!! And with this amazing bunch of people, I cant tell you how excited. Dream come true”

GTA 5 mods and cheats – All codes and numbers for Grand Theft Auto...

Who is Twitch streamer CrazySlick?