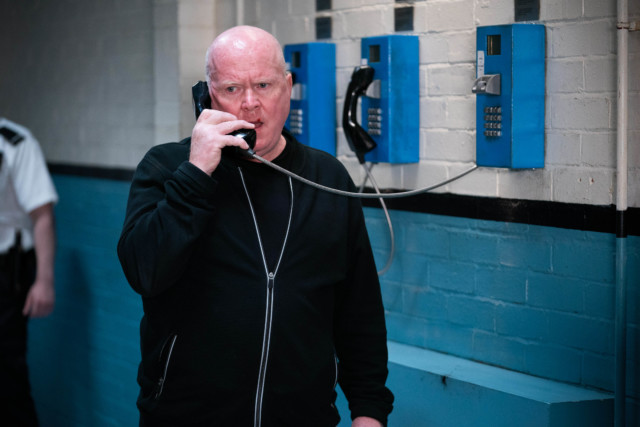 THROWN behind bars earlier in 2022, Phil Mitchell is in grave danger this week after making a new enemy.

Meanwhile, his sister Sam continues to cause trouble in the Square. Here’s what you need to know about this week’s EastEnders drama. However, DCI Keeble reminds him her offer is still on the table

While almost untouchable in Albert Square, things are very different in prison as Phil makes an enemy with another prisoner named Craig.

This prompts him to turn to another inmate called Ravi (played by Aaron Thiara) as he tries to get his hands on a burner phone.

But there’s more trouble brewing and when a fight breaks out between him and Craig, forcing the guard to step in, Phil knows he could be risking his life.

Phil goes to Ravi again to ask for help, promising him money in exchange.

It doesn’t take long for Craig to issue a blood-curdling warning – Phil only has hours to live as his new nemesis vows to kill him the following day.

Meanwhile, DCI Keeble seems to sense that life in prison is getting too hard to handle for Phil and tells him he won’t survive much longer behind bars – unless he accepts to become an informant for the police.

With her offer back on the table and a target on his back, Phil is torn but DCI Keeble destroys all hopes of backup when she tells him more about Ravi.

Phil ties up some loose ends by handing her five letters for her and his family – forcing Sharon to come terms with what’s going on.

This prompts Sharon to beg Phil to take Keeble’s deal.

But Phil’s time runs out.

In later scenes, Craig and his men corner Phil. Meanwhile, Sam is trying to get her hands on the family business

2. Sam steps up her plan

As Phil could be set for a shocking death this week, his younger sister Sam (Kim Medcalf) causes another stir in the Square.

New pals Sharon and Kat Slater (Jessie Wallace) are in her target line as she’s trying to push them away from the family empire.

After taking a bullet for the owner of Kat’s Cabs and causing doubts about her relationship with Phil to emerge, Sam takes her plan to the next level.

It all starts when Sharon first receives a package on the day of her late son Denny‘s 16th birthday – which Sam could use to her advantage as she’s accused her long-term foe of having an emotional affair with her brother.

Kat receives a call from an incarcerated Phil who asks for a favour, but the line goes dead.

In later scenes, Kat grows increasingly worried and is left on edge when she’s harassed by a mystery caller.

Phil contacts her again for a favour while Sam puts the final pieces of her plan into place.

Matters only get worse for Kat when another threat is sent to her through her young son Tommy.

Sensing an opportunity, Sam offers Kat some advice, which prompts Kat to make a difficult decision about her relationship. As teased by EastEnders bosses, Walford will be welcoming new residents and some familiar faces have already waved goodbye to the borough for the beginning of an explosive summer of drama.

This week, Mitch Baker (Roger Griffiths) is faced with the arrival of a family member played by musician Omar Lye-Fook.

The cabbie’s older brother Avery makes his entrance in his flash car and immediately lands himself into trouble with the Square market traders.

Not wanting to get off on the wrong foot with them, Avery nips any budding tension in the bud by planning a gathering in The Vic and inviting everyone along.

Meanwhile, Mitch is less than interest in a birthday gathering for himself but Karen Taylor (Lorraine Stanley) drags him over to The Vic for a celebratory drink.

However, the pair get more than what they bargained for in the first place as Mitch bumps into Avery – his estranged older brother.

Avery charms Walford residents but things grow tense at the Taylors’ when he impresses Mitch’s family.

The cab driver, on the other hand, refuses to give him the time of day.

And it soon becomes clear Avery is keeping a dark secret.

Back at The Vic, the brothers hash things out but Mitch snaps at Avery, reprimanding him for when he wasn’t there when he most needed it.

Avery apologises and asks a reluctant Mitch to help with a job and while the latter is convinced his sibling has an ulterior motive, Karen encourages him to make amends.

Mitch agrees to give his brother another chance at fixing their relationship and when Avery arrives with a van full of white goods, he’s convinced it’s all legit.

But after doing the job, Mitch realises Avery lied to him.

Avery is told to stay away from Mitch’s family but still decides to visit his brother.

Upon his arrival, he sadly collapses and Mitch has no other choice but to call his two sons, Finlay and Felix (respectively played by Ashley Byam and Matthew Morrison).

What is Avery hiding? Ben is still struggling to overcome trauma from his rape

Kathy Beale (played by Gillian Taylforth) will have to work hard to keep the peace between Ben Mitchell (Max Bowden) and her grandson Peter Beale (Dayle Hudson).

Peter has been determined to rattle his uncle after he was told by Lewis Butler that Ben was responsible for his assault.

This is particularly hard on Ben as he was raped by Lewis and is still trying to cope with his everyday life.

Worried to see the situation escalate, Jay encourages Ben to tell him the truth.

Ben takes Jay up on his advice and finds Peter to offer him an olive branch.

But instead of getting to the bottom of things and nipping any conflict in the bud, Peter makes it clear he’s less than interested in making amends.

Will they ever be able to get along? Kheerat and Stacey have been seeing each other in secret

5. Stacey is devastated by Kheerat

Elsewhere, Stacey Slater (Lacey Turner) is growing frustrated with her on-off relationship with Kheerat Panesar (Jaz Deol), especially since he is intent on keeping it under wraps.

Believing him to be embarrassed by her, the food van owner decides to kiss her beau publicly in the café to test him and see if the romance is worth all the trouble.

When his mother Suki (Balvinder Sopal) walks in, Kheerat backs away from Stacey, leaving her devastated.

Infuriated by the rejection, Stacey decides to end the relationship.

Can Kheerat fix things with Stacey?

Tune in this week to BBC Two or head to BBC iPlayer to find out.

Kate Middleton and Prince William praised as sweet for including pics of Harry, Meghan...

Why are FA Cup 3rd round matches kicking off one minute late and whats...