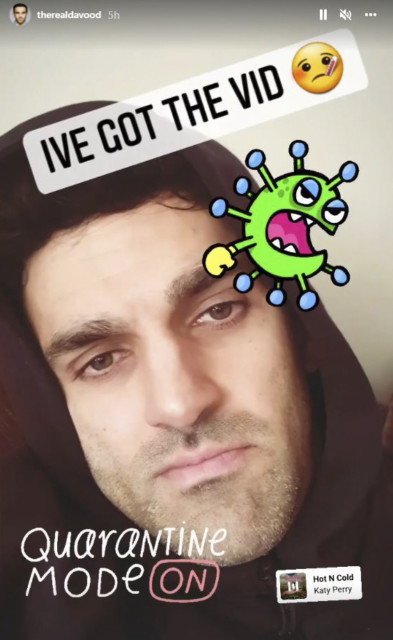 The actor, 39, – who is most known for his role as Kush Kazemi on EastEnders – shared an up close selfie of his face to his official Instagram Story.

He looked unwell and pale as he confirmed he has the coronavirus by writing over the pic: “I’ve got the vid.”

Davood, who is now performing as a surgeon in medical drama Holby City after being killed off EastEnders, followed it up with an emoji with a thermometer in its mouth.

He placed a “quarantine mode” gif over it as well as a graphic of an angry virus cell.

To complete the selfie of his sad face, he played Katy Perry’s hit song Hot N Cold over the top.

The star looked very poorly compared to how he usually looks in his posed topless selfies.

Davood is no stranger to a selfie flexing his muscles and can often be found whipping off his Holby uniform to flaunt them.

He recently joked over one pic: “Went a bit Bruce Forsyth whilst shooting tonight’s Holby City.”

The actor made his Holby debut as cardiothoracic surgeon Eli Ebrahimi a few months ago.

And it couldn’t have been a more painful start, with Davood suffering an injury the day before.

He wrote: “My first day on the job. Nervous. Zero sleep (as I dislocated my shoulder the day before ). Thought id take a pic on the way up to ‘Darwin’. Couldn’t get over how comfy the scrubs were! All the cast and crew were magnificent that day and have been every day since! Love my Holby home.”

His character has had plenty of drama since his arrival.

Davood played market trader Kuz Kazemi in EastEnders from 2014 until earlier this year when Kuz was brutally murdered by solicitor Gray Atkins. The star is now a surgeon on Holby City Did you miss our previous article…
https://www.hellofaread.com/soap-opera/corrie-spoilers-fans-suspicious-curtis-delamere-lying-about-his-sickness-plus-eastenders-emmerdale-spoilers/

Kate Middleton and Prince William to visit Australia to meet victims of the devastating...

EastEnders spoilers: Chantelle Atkins terrified as her plan to flee Gray is thwarted –...