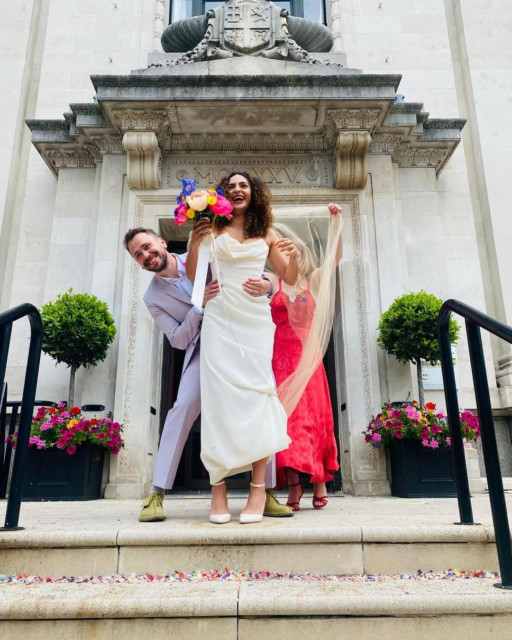 The couple, who have been together for seven years,  were due to get married earlier this year but were unable to due to Covid restrictions.

But they finally said ‘I do’ earlier today at Islignton Town Hall in London, with Anna sharing a series of pictures from the special occasion.

Alongside the snaps, she joked: “Introducing my first husband

The actress, 29, looked incredible in a strapless, fitted cream gown for the occasion, a veil and a bunch of bright, wild flowers. The 29-year-old looked incredible in a strapless gown In March, Anna shared her frustration at not being able to get married due to the pandemic.

She told her followers at the time: “Today was supposed to be the day we got married down the registry office with our parents (because… f**king hell, joy please!) but COVID had other plans. Ah well.

“I was gunna wear this dress so figured I’d wear it anyway and we’d drink champagne all day. Swings and roundabouts.” Anna shared a series of pics from her big day Anna  is best known for her role as for her roles as Ruby Button in Hollyoaks and Romilda Vane in the Harry Potter film series.

More recently she plays the role of Triss Merigold in the Netflix series The Witcher.

Speaking previously about starting her career with Harry Potter, she said: “Obviously coming from such a huge film franchise meant that whatever I did next was going to feel strange but I feel so lucky that I was young enough that as incredible as the experience was I still just wanted to be a normal kid and hang out with my friends in the park.

“As a big fan of film and TV myself, I’ve always just wanted to be in things that I would love to watch myself and feel really grateful and proud that for the most part that’s what I’ve managed to do!”

Did you miss our previous article…
https://www.hellofaread.com/soap-opera/coronation-streets-aadi-alahan-on-shock-romance-with-summer-spellman/

Covid vaccine should help end mask laws by spring & Brits can ‘fly on...

9am Meghan and Harry latest news – New neighbours moan about as Royal couple...

Boris Johnson reeling from his most painful U-turn yet — with all sides of...