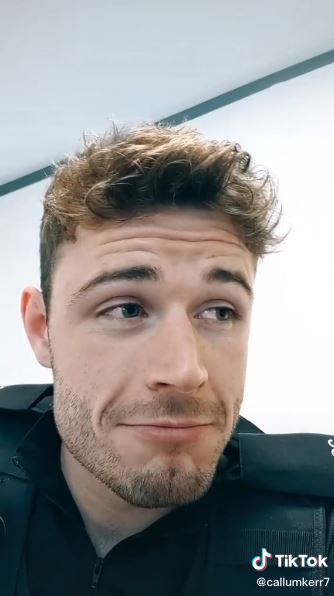 The actor – who plays PC George Kiss – shared a video of TikTok in his full police officer costume.

At this point, Callum looks away shocked, captioning the bit: “trying my best but I’m carrying handcuffs #foryou #foryoupage #police”

Unsurprisingly, fans got a bit hot under the collar at the actor’s admission.

One person commented on the TikTok video: “ARREST ME PLEASE He was dressed in his PC Kiss uniform He joined the soap in January

Another added: “I’m ready to go to

” with a third saying: “I think i need arresting. I’m not sure what crime i have committed yet

PC Kiss arrived at Hollyoaks in January and has been a fan-favourite ever since – with people constantly saying they are “desperate to get arrested”.

The character is currently involved in a fling with teacher John Paul McQueen.

Before bagging his role on Hollyoaks, Callum was actually scouted for Love Island after bosses saw his hunky posts on Instagram. The star was scouted for Love Island on Instagram

“They were sure he would be a huge hit with the ladies in the villa but it just wasn’t to be.

“It was a no go for him. He’s happy in his relationship and he’s an actor and that will always come first for him.”

Months later Callum went on to land his biggest role to date as the hunky police officer in the teen soap.

Who is James Hewitt and what are the false rumours he’s Prince Harry’s dad?