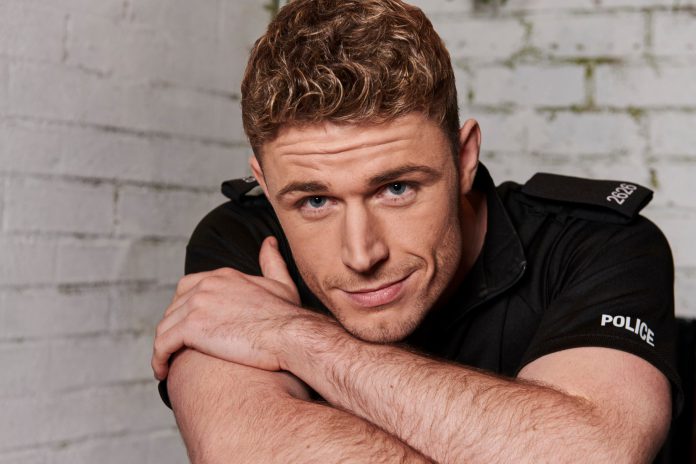 The Channel 4 soap confirmed PC Kiss will arrive in the village after pregnant teacher Nancy Osborne [played by Jessica Fox] is stabbed at Hollyoaks High School during an altercation between students.

The incident happened due to Jordan and his accomplices trying to infiltrate the school with their drug trade.

PC Kiss is the officer investigating County Lines, which will reach Hollyoaks High this year.
Talking about his upcoming role, Callum said: I feel very honoured to be joining the cast of Hollyoaks during such a thrilling time for the show, my first couple of months have been brilliant and the cast and crew are very friendly and welcoming.”

The cop role as a special significance for Callum, who added: “My grandfather was a policeman like my character, so he’ll be delighted to see me in the uniform.

“I’ll be part of the team investigating the County Lines storyline, which will hopefully help raise awareness of a relevant topic and shed light on a serious issue.

Callum previously played Duncan in the 2019 TV series adaptation of Four Weddings and a Funeral.

He will first appear on screen on Wednesday, January 29 in the E4 First Look episode.

The dark new storyline will play out this year as city dealers make a play to flood the village with drugs, and there’ll be dire consequences.

Mysterious newcomer Verity was introduced to her hospital-bound brother by dodgy Edward.

The Hollyoaks stalwart’s failure to recognise her made fans suspicious of her identity.

While Sid Sumner’s cousin Jordan has been revealed as a drugs boss in the county lines storyline, fans are convinced Verity and Edward are involved too.

Hollyoaks airs at 6.30pm on Channel 4 every day with the First Look episodes airing at 7pm on E4.

Royal fans all say the same thing as horse spotted without a rider at...