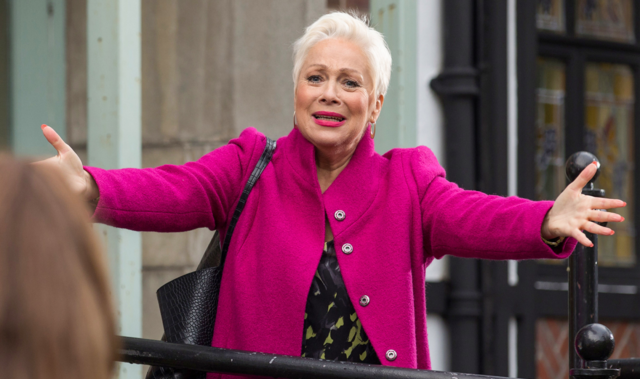 The actress made her debut in the Channel 4 soap last night and her character wasted no time in showing she wasn’t a great mother.

Denise has teased the dark story to come

She discovered her boyfriend Brad had hit on Maxine, but instead of being furious at him, she blamed her daughter for “trying to cause trouble”.

And now Denise has teased that it’s only the tip of the iceberg and Trish and Brad are as bad as each other.

Speaking exclusively to HOAR’s TV Mag, Denise said: “The thing about Maxine and Brad having kissed is that Brad can wrap Trish around his little finger, but Trish is under no illusions that Brad is a womaniser – but as long as he is coming back to her, she sort of turns a blind eye to it.

Maxine is a victim of Trish’s indifference

“Brad manages to say something to her like ‘we’d broken up’, but yeah they’d had an argument and hadn’t spoken to each other for three days and that’s enough for Trish to be okay with it.

“Basically, Trish is moving back to Hollyoaks with Brad, who she’s besotted with, he is a property magnate – in inverted commas, not really though!

“There’s lots of dodgy stuff going on, but you’ll find out that they’re as bad as each other. So, there is going to be lots of drama with Maxine and Trish.”

And Denise teased a dark side to Trish that saw her neglect and abuse her daughter rather than encourage and support her.

“She was a pushy dancer teacher, and we will see that come out,” she said.

“That will be very much highlighted in the storylines, but when you think of some of these dance mothers – and Dance Moms a few years ago, Abby-Lee Miller in Dance Moms, there was a pretty dark side to her with the way she was.

“So what we find out is that Max never lived up to her mother’s expectations, she was pushed to the back all the time, she was made to feel like she had two left feet, was too fat, she was all those things, and when Maxine brings that up, Trish is like, ‘yes I know, but you eventually got a leading role’.”

Did you miss our previous article…
https://www.hellofaread.com/soap-opera/eastenders-fans-gobsmacked-by-orange-juice-blunder-as-phil-mitchells-favourite-tipple-sets-him-back-a-fiver-2/