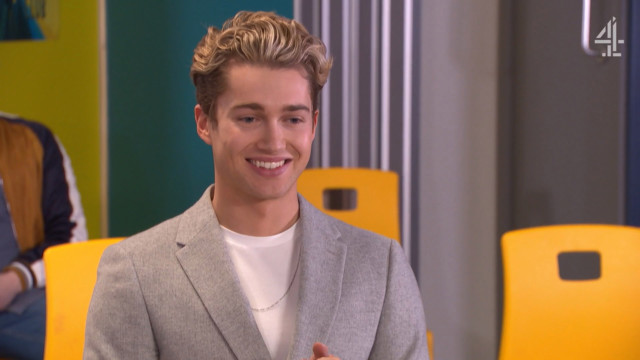 AJ Pritchard has made his acting debut on Hollyoaks, with viewers split over his performance.

Dancer Marco made his first appearance on the long-running Channel 4 soap tonight as a rival of Trish Minniver (Denise Welch).

AJ Pritchard has joined Hollyoaks as the ‘sly’ Marco

The newcomer ruffled Trish’s feathers as he arrives just in time for the grand opening of her new dance school.

Trish’s big day got did not start so well when her boyfriend Brad King (Tom Benedict Knight) failed to show up.

But things got worse for Trish when her rival, Marco turned up to her dance school.

It was AJ’s time to shine with the former Strictly Come Dancing star seeming to relish playing a ‘sly’ character.

But some were less than impressed and shared their thoughts, “Aj Pritchard should stick to dancing”, declared one person. A second agreed: “Just cos AJ pritchard is famous does not mean he should try acting oh my god”.

Speaking about his character’s ‘sly’ side, AJ recently told Inside Soap: “Marco is Trish’s [Minniver] rival from a previous dance school.

“He’s a very cheeky and confident guy. Marco knows what he wants and when he turns up, he acts as if he owns the place.”

The former Strictly Come Dancing pro added: “Marco arrives for Trish’s grand opening which, as you’ll see, is not so grand due to a couple of mistakes on Maxine’s [Minniver] part, which was fun to film.”

AJ will be making his debut on the soap alongside his real life brother Curtis Pritchard, who is set to play Marco’s on-screen twin brother. Talking about his unique connection with Curtis and how it translates on-screen, AJ added: “It’s great because Curtis and I know each other so well from dancing and performing live, so we just get to play off that.”

He added: “They’re really fun characters that are a bit sly.” AJ admitted he loved playing the cheeky Marco on Hollyoaks

AJ left fans stunned last month when he confirmed that he and Curtis would be joining the soap.

“I can’t believe we will be featuring on Hollyoaks, we have grown up with the show on TV and it’s always been one of our favourite serial dramas,” AJ said at the time.

He added: “Our characters are fantastic, and we can’t wait for everyone to see how we bring them to life.”

AJ quit Strictly last year to try his hand at other TV projects, and appeared on the first UK-based I’m A Celeb in Castle Gwrych finishing sixth in the series.

How London could look under new European-style plans to shut down streets so Brits...