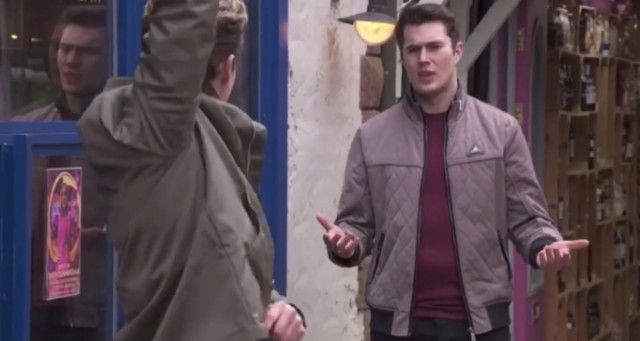 HOLLYOAKS fans were in hysterics at AJ Pritchard’s bizarre dance moves on the soap after they mocked his and Curtis’ “wooden” acting.

The Strictly star, 26, and his Love Island star brother, 25, are playing Marco and Jacob in the Channel 4 soap.

AJ performed a little dance for Curtis on Hollyoaks

The pair have their eyes on taking down Trish Minniver – played by Denise Welch – and managed to get a hold of her “black book” in Thursday, May 13’s episode.

But fans have ridiculed the scene, which involved AJ doing a dance number in the street before providing the book.

The TikTok video filming the soap has writing over it that says: “What was you thinking Hollyoaks? Maybe the producer was drunk”

The tweet sharing it says: “The Hollyoaks producers are never seeing the gates of heaven for this”

Fans ended up mocking the dance The pair were already criticised for their “wooden” acting

A third said: “Love AJ but this is cringe”

However, not everyone was against the scene, with one person saying: “Can’t stop watching these two I hollyoaks. Perfection”

It comes after the dancing duo were ridiculed by fans for their acting.

While some said they were “in love” with the pair already – others reckoned their acting was a little on the wooden side. One posted a picture of a block of wood writing: “Aw aj & curtis’ first scene was cute.”

Another tweeted: “AJ and Curtis must have been Pinocchio in a past life – because their acting are as wooden as a marionette!” The brothers are trying to con Denise Welch’s character Trish

The elder of the two brothers, who come from Stoke-on-Trent, then appeared on I’m A Celeb finishing sixth in the first ever UK-based series.

After Love Island, where he coupled up with Maura Higgins, he landed a job on the Greatest Dancer, before appearing on Celebs Go Dating and RuPaul’s Drag Race.

Meghan Markle’s most expensive royal tour outfits revealed & how she used them to...

Royal Family news – Prince Harry may NEVER return to live in UK as...