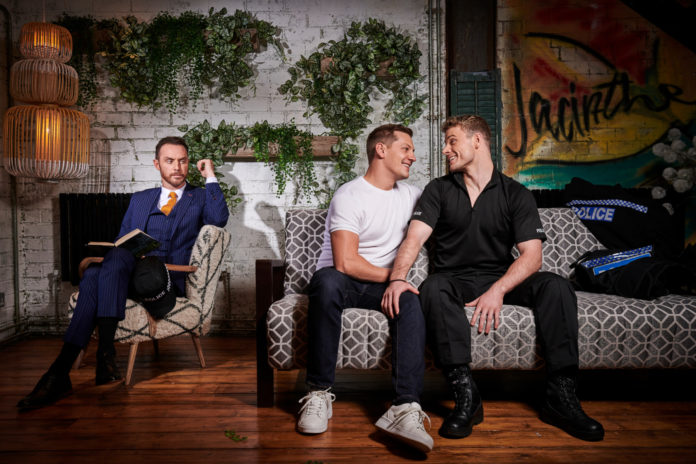 Hollyoaks’ James Nightingale is about to get green with envy when he locks eyes on John Paul McQueen and his new love interest.

In the snaps, John Paul and PC Kiss are sat side-by-side on a patterned sofa and gazing into each other’s eyes, as PC Kiss rests one hand on John Paul’s leg.

And lurking in the background is Hollyoaks solicitor James (Gregory Finnegan), who has had a fling with John Paul in the past.

However, their romance ended in disaster when John Paul learned during Liam’s (Jude Monk McGowan) hellish dinner party that his lover was the mystery villager who’d left Mercedes (Jennifer Metcalfe) for dead on The Loft’s dance floor. But John Paul appears to be on cloud nine once again, thanks to Sally St. Claire’s (Annie Wallace) matchmaking skills.

Her meddling initially angers John Paul, especially when she tries to find out if the hot police investigator has similar feelings for him.

As things get heated between the pals, Matthew-Jesus (Matthew Clohessy) steps in and shocks everyone by asking PC Kiss whether he prefers boys or girls.

Matthew-Jesus’ surprising question lets Sally get back to her matchmaking ways and sets up a special visit by the police officer to John Paul’s home the next day. The set-up leaves John Paul cringing with embarrassment but judging by these latest pics, it seems he’s not embarrassed for long.

Earlier this year, PC Kiss actor Callum Kerr hinted that “there could be a nice relationship” in the works for his character.

The drug investigator arrived in the village in January after Nancy Osbourne was viciously stabbed – but soon realised there was more going on in the village with the county lines drug dealing.

Yet, viewers had suspected that PC Kiss might be the dead person John Paul was seen crying over in the New Year flash forward.

However, Callum downplayed the speculation in a recent interview with Digital Spy and said: “I’d love to have a long, healthy stint on the show.

“I’ve not read the stories that far in advance!”