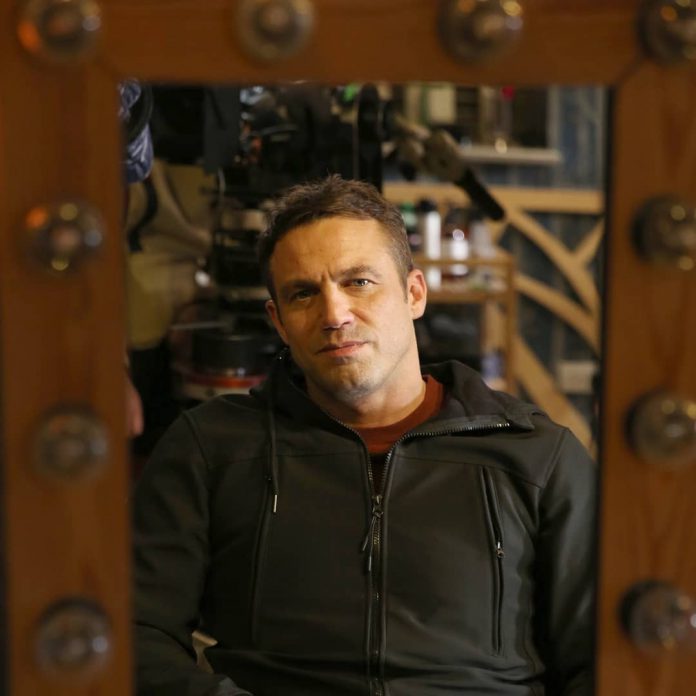 HOLLYOAKS has revealed the first look at Warren Fox’s return to the village.

The gangster – who is played by actor Jamie Lomas in the Channel 4 soap – looks back to his moody best as he shoots scenes for his new year full time comeback.

Warren’s return was teased with this behind the scenes snap

Warren made a brief return earlier this year after preventing ex-girlfriend Sienna Blake from getting their twins back after his original kidnapping of them.

The pair were at war after birth of their twins follwing a breakdown of their relationship with Sienna’s unhinged side being more than a match for Warren’s villainy.

Soap boss Bryan Kirkwood revealed the writers only decided to bring Warren back to the village after finding the perfect story for it.

Speaking exclusively to The Sun Online, Bryan said: “That’s one of the best long running tensions in the show that Sienna and her missing twins, Warren’s off somewhere in the world with her twins.

Please help us out guys, last few days to raise awareness and money for some much needed charities, working with mental health issues and homelessness, thank you to everyone that has supported us so far, to donate click on the link in my bio, every little helps

“There’s a very good reason, we kind of racked our brains as to why Warren would ever lay himself open to be found by Sienna.

“But we think we’ve come up with a very good reason why Warren and the twins and Sienna meet again and that will explode in January.”

Actor Jamie Lomas has undergone a dramatic makeover to get back into character for the gangster after filming a short film as a homeless war hero who falls on hard times.

He filmed the scenes with a huge bushy beard for the short film which aims to raise awareness of issues that ex-servicemen and women can suffer from when they leave the armed forces.

It also stars former Emmerdale star Sammy Winward and was developed alongside charities Broughton House, Combat Stress and Soldiers Off the Street.

*Hollyoaks airs weeknights on Channel 4 at 6.30pm with a first look episode following on E4 at 7pm