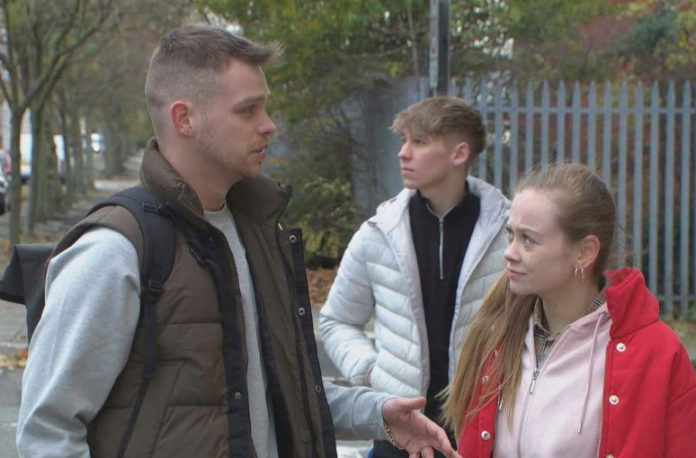 IN a rollercoaster week for the Hollyoaks gang, there’s twists and turns galore in some gripping storylines to keep you entertained during lockdown.

The Deveraux family reveal more dark secrets as Felix blackmails Walter and Sid gets dumped by a disgruntled Juliet. Here’s all the spoilers you need ahead of this week in the Chester village.

As tumultuous teenage relationships go, Juliet and Sid have have their ups and downs, but it seems to all come to head this week.

In a bid to save the rocky partnership, Sid plans a romantic trip away for the two of them, only to find out fiery Juliet has invited mates Ollie Morgan and Imran Maalik along.

Sid shares his frustrations by having a go at Juliet about his romantic plans being ruined.

She then finally has enough and dumps Sid.

The more worrying underlying twist in this tale is that Sid’s cousin Jordan Price – drug dealer and all round nasty character, helped plan the impromptu getaway – with a hinted ulterior motive to lure the teens to his sinister trafficking ring. Felix blackmails Sid over a dark secret this week in Hollyoaks

We’ve had abandoned triplets, long-lost fathers and heartbreaking suicides within this family and it seems the mystery continues as Felix blackmails God-fearing Walter over a previous misdemeanour.

Walter looks unnerved at the prospect of his past mistakes being shared as Felix threatens to expose him if he doesn’t help build bridges with Mitchell.

We are about to find out what Walter is so eager to hide from his grandson. Troublesome Felix is at it again and in a twist that I don’t think even the most die-hard fan saw coming- it turns out that he grew up in the same care home as Warren Fox.

The two come head-to head as we find out that Felix was a cruel abusive bully and turned Warren into bad boy we all know and love.

Warren orders Felix to leave the village and they are about to come to blows when Grace Black steps in to break it up, before the plot takes an even more unexpected turn… Continuing to support each other as they both cope with depression, Kyle seems to be doing a better job at hiding his feelings and Darren offers to help him plan his upcoming wedding to former wife Nancy.

But the pressure pressure of Nancy’s ever-growing to do list only adds to Kyle’s feelings of failure and it looks like this all might push him over the edge.

When can I watch Hollyoaks?

Airing of new episodes is temporarily reduced and the soap will only be currently showing twice a week on Mondays and Tuesdays at the usual times of 6.30pm on C4, and 7pm on E4.

If you are feeling lost without your daily dose of the show, E4 is running classic episodes from its archive every weekday.

Priti Patel will accuse Facebook of trying to ‘blind itself’ to sick child abuse...