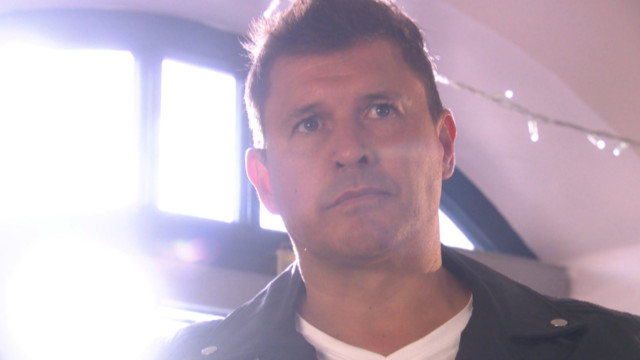 JEREMY Edwards is back as bad boy Kurt Benson for the 25th anniversary of Hollyoaks – despite his character “dying” in a jet-ski tragedy.

In an exclusive interview, the fan favourite revealed the 1999 accident was not what the soap village thought and Kurt is back for the long-haul, and to see his old pal Tony, played by Nick Pickard.

Hollyoaks’ Kurt Benson, played by Jeremy Edwards, returns to the village after 20 years to celebrate the soap’s 25th birthday

Jeremy said: “He didn’t die. It was reported that while he was travelling, he died in a jet-ski accident, but that wasn’t the case.

“He’s been on the run for a long time and he’d had enough of that.

“He comes back to see Tony, to be home. Put it like this: He’s not disappearing.

“We’re just tackling this storyline of Kurt and Tony reuniting, and trying to help each other. But going forward, there’s so much room. “Read between the lines — I look forward to working with other characters.”

Jeremy, who left the soap after four years, will return next Monday and admitted he is not surprised the show made it to this milestone.

He said: “When we first started, it was a six-month stint. We as a cast worked hard to make it as good as we could.

“And it’s changed the face of other soaps. Not long afterwards, EastEnders brought in a young hot guy and Coronation Street brought in Adam Rickitt.” After the actor’s appearance on The X Factor: Celebrity with his pal, former Strictly pro Brendan Cole, Jeremy is not planning to do any more reality shows and ITV’s I’m A Celebrity . . .  will be definitely out of the question.

He said: “Dancing On Ice I did because you learn the skill. With The X Factor, we got wonderful singing coaching. You don’t need to learn how to eat kangaroo bits.”

Hopefully Jeremy won’t have to worry, now that he has his old job back.

Did you miss our previous article…
https://www.hellofaread.com/soap-opera/emmerdales-michelle-hardwick-gives-birth-to-a-baby-boy-with-producer-wife-kate-brooks/

What is an OBE and what does it stand for?

Curfews could be introduced to other parts of country as coronavirus sweeps through Britain,...