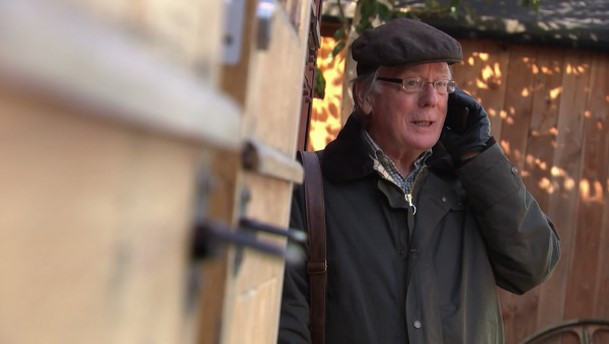 HOLLYOAKS viewers are convinced PC Kiss is serial killer Silas’s secret son and the two are working together to blackmail the McQueens.

Wednesday night’s episode dropped a huge shock on fans with the return of the misogynistic murderer, played by actor Jeff Rawle.

He hadn’t been seen in the village for four years, ever since he was drawn back by the Gloved Hand Killer Lindsey Roscoe.

However their partnership ended when he kidnapped Mercedes McQueen and she filled him in on exactly the kind of person Lindsey was.

Silas murdered Lindsey and then let Mercedes go, claiming to realise she had turned over a new leaf and was no longer the woman he thought.

But Wednesday night’s episode changed all that and he was back for her. Could the handsome copper be hiding a murky family secret? Silas is back in the village and is out for revenge

And now viewers think they’ve figured out who he’s working with after Silas was seen chatting on the phone to someone with a link to the McQueen family during Thursday’s first-look episode on E4.

Taking to Twitter, one fan wrote: “Imagine if Silas and PC Kiss are related and they wanted revenge omg.”

A third asked: “What if PC Kiss is Silas’ son and they are working together? Now that would be a storyline to follow.”

“Is PC Kiss the love child of Silas?,” wondered another. Could PC George Kiss be the son of Silas?

Fans of the show know that PC Kiss, played by Callum Kerr, is dating Mercede’s brother John Paul but their romance is having problems.

Earlier this week the hunky copper arrested Sylver McQueen for the murder of his mother Breda McQueen, after he recieved footage of him admitting to the crime.

Did you miss our previous article…
https://www.hellofaread.com/soap-opera/eastenders-exit-for-habiba-ahmed-as-she-leaves-walford-suddenly/

Maura Higgins stuns in a sexy silk dress for dinner out with Molly-Mae Hague...

Meghan Markle ‘needs to start respecting the Queen and stop trying to push her...