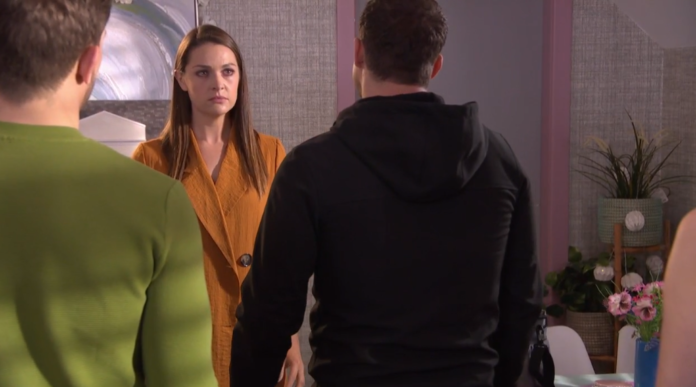 HOLLYOAKS fans are predicting Warren Fox is going to regret recording the video admission of all his many crimes.

The gangster – who is played by actor Jamie Lomas in the Channel 4 soap – handover a recording of him admitting to all his murders to ex Sienna Blake in an effort to convince her that she could trust him with their children.

Warren found Sienna back in Hollyoaks

Warren had originally kidnapped the twins and kept them away from Sienna for more than two years before she took them back and did her own flit.

With Sebastian seriously ill and in hospital, Sienna returned to the village and Warren found her tonight.

But far from threatening her, Warren made an emotional plea to be reunited with his kids.

But as Sienna told him she would never trust him with the children, he had already come up with a plan to win her trust back. He confessed all his crimes Handing over a video recording of himself confessing to all of his many crimes, he said: “It’s OK, I’ve got an insurance policy for you. I had to give you a reason to trust me again.”

Warren said in the recording: “I have taken five people’s lives. I took yours when I took our kids. Sean Kennedy, I put him in a shallow grave and then I moved his body to the River Dee.”

A shocked Sienna took the video from him and decided that they needed to unite to do what’s best for their children.

However fans are convinced something will go awry and Warren will end up regretting making the video when it lands him in prison.

One wrote: “Go on then Warren, let’s see you walking into the police station and handing that in. I DARE YA.”

A second said: “So Warren life is in Sienna hands”

Another added: “I dont feel a tad sorry for Warren. I’d send that video to the police. And then bye, bye.”

Ex-British intelligence officers say Jeremy Corbyn is at the centre of a hard-left extremist...

Boris Johnson urges Brits to get vaccinated to make next Christmas even better in...