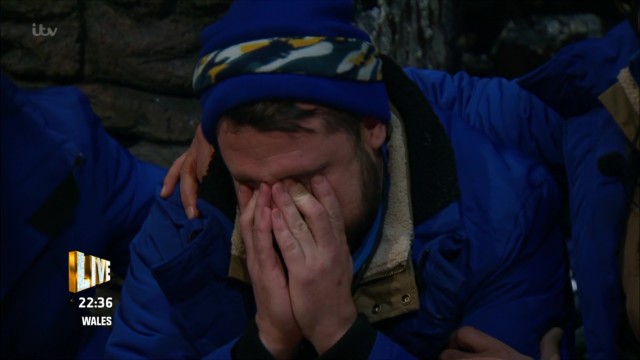 DANNY Miller has suffered a minor breakdown after being voted by the public to do the first I’m A Celebrity bushtucker trial.

The Emmerdale star – who plays Aaron Dingle in the ITV soap – will take on a disgusting eating challenge to win meals for his clink campmates.

But when Ant and Dec announced the public had selected Danny for the Dreaded Diner trial, he went into a tailspin.

“They said diner,” said Danny as he began to panic.

Arlene Phillips and David Ginola tried to comfort him but Danny couldn’t hide his horror at being selected.

Presenters Ant McPartlin and Declan Donnelly confirmed the other celebrity contestant who will take part in the trial will be announced on Monday’s show.

Meanwhile Richard Madeley and Frankie Bridge took on their first I’m A Celebrity trial during the series launch, completing challenges while critters rained down upon them.

The TV presenter and Saturdays singer faced the Turrets Of Terror, a three-level structure built in front of Gwrych Castle, after receiving the most votes from the public.

Bridge was quicker to complete each of the challenges which unlocked keys to each level.

The star retrieved the key to the castle for the newly formed red team, ensuring them a stay in the main camp with food and a bed, while the losing yellow team spent their first night in “Castle Clink” and will be given basic rations.

The new series of the ITV show kicked off with soap star Danny Miller, music producer Naughty Boy, presenter Louise Minchin and radio DJ Snoochie Shy attempting to walk across a wooden plank 213 feet in the air above a quarry lake, before stamping on a button with their foot to make their opponent’s platform drop.

The group were transported to the challenge in a helicopter.

Miller revealed he suffered from car sickness and threw up in his mouth during the journey while clutching a sick bag.

However, to reach the keys they needed to insert their arms into “hell holes” filled with snakes, with Cox and Lee coming out on top.

Viewers watched as the teams saw their living quarters in the castle for the first time.

Dame Arlene, the oldest contestant on the show ever, said: “I’m about to sleep in probably the single worst bed I have been in my 78 years.”

Broadcaster Madeley started a fire for the Castle Clink group and music producer Naughty Boy admitted he had tried to smuggle an array of spices into camp but said they had been confiscated.

Bolton could be hit by RIOTS if ministers try to impose new local lockdown...