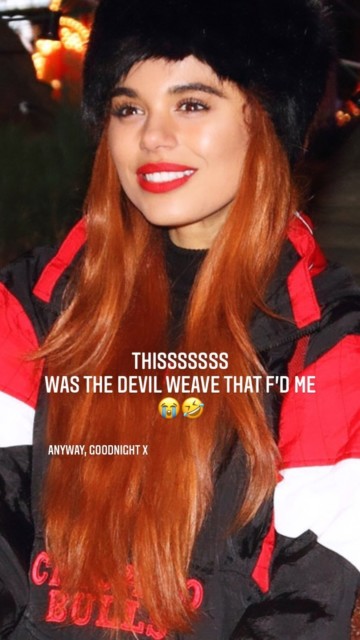 I’M A Celebrity star Jessica Plummer has opened up about the bright red “devil” weave that “destroyed” her hair.

The ex-EastEnders actor, 28, looked totally unrecognisable in a throwback snap which saw her usual brown, curly locks replaced with the long, red weave.

I’m A Celeb star and singer/actor Jessica Plummer opened up about the long, red “devil” weave that “f’d me”

“Thisssssss was the devil weave that f’d me,” she wrote alongside the pic.

Jessica then went on to explain how the weave caused a small bald patch, discussing the topic in several lengthy social media posts.

She told her 334,000 Instagram fans – alongside a crying face emoji: “I used to wear a weave with full front that ripped the front section of my hair out leaving me with a bald patch (about the size of a 5p coin, but at the time obviously felt huge).”

After realising the damage it had done, Jessica managed to rescue her locks in less than a month.

Jessica had the weave when she was in the girl group Neon Jungle, who enjoyed chart success in 2014 Though it only took a month for Jessica to regrow the lost hair, thanks to a miracle product She shared: “I went to my local black hair shop and bought Jamaican black castor oil. It took roughly two weeks for the hair to grow back, and was completely unnoticeable after a month.

“However what I will say, is this helped hair that been lost due to damage, not hormone/age/disorder related. I’m not sure if it will work on hair loss caused by these things.”

Fans were keen to know the exact miracle product she used – which she quickly revealed in another Insta vid. Today, Jessica embraces her natural curls – and has shared top tips with fans keen to soak up her expertise Quickly, the former Neon Jungle singer was inundated with queries from fans about how she manages her hair today.

Plus fans were also keen to know how she takes care of her four-year-old daughter Noa’s hair, which is similarly curly.

She shared: “Figuring out what your curls need is a chore and a journey, but once you get the right formula

“Like mine, I only ever shampoo Noa’s scalp, never her actual hair strands.” No doubt her fan base has grown since appearing on I’m A Celebrity 2020, with opera singer Russell Watson

As for brushes, those with curly hair may well already know the challenges of a conventional comb – though Jessica was quick to cite her solution.

“Whoever invented the Tangle Teezer is a genius LOL. I started using them on myself maybe five years ago now.

“Iv never been able to detangle my hair with a comb and find my hair is pulled out so much more with conventional brushes.”

Finally, she revealed her ultimate secret weapon: avocado oil, to be applied to curly hair when wet. Many fans will of course remember Jessica from EastEnders, whose character Chantelle was killed off Jessica posing in (and with) the legendary Queen Vic

“A lot of you asking which avocado oil I use,” she continued in her impromptu Instagram tutorial.

Jess then shared a pic of the product she uses – Olivado Extra Virgin Avocado Oil, usually costing between £5 and £6.49 – which is advertised by retailers as a food product.

She quickly added: “Also word of warning: with avocado oil, a little goes a long way! Advice for fans with curly hair kept rolling in, including to only use avocado oil when your hair is wet “And if using before bed, wrap your hair (we should be doing this anyway) – cos if your hand is heavy and it didn’t have time to sink in, your pillow will be green in the morning.

Call of Duty has banned 350,000 players for ‘racist and toxic names and behaviour’

Westminster’s clocks take a team of THREE people 24 hours to change as UK...