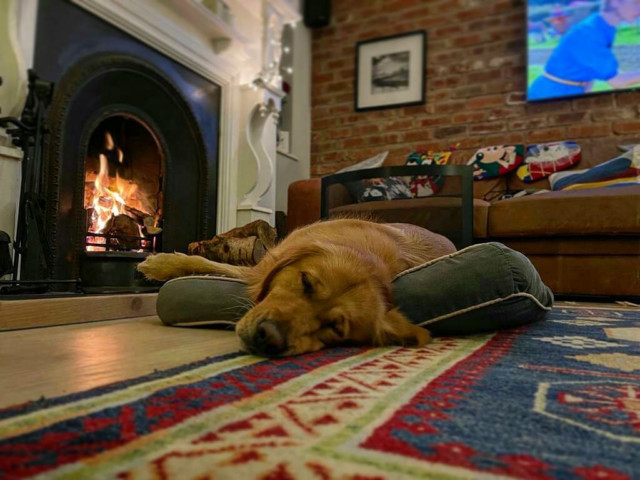 CORONATION Street star Charlie de Melo has a cosy, stylish home that he shares with his two adorable Golden Retrievers.

The actor, who HOAR exclusively revealed last night has quit Coronation Street after five years, regularly shares pictures of dogs Toni and Sarah around the house. A litter of gorgeous pups played in his grassy garden, melting his followers’ hearts.

However, the dogs didn’t stay at his home for long and Charlie, 30, said an emotional goodbye to the fur babies as they left to be trained up as guide dogs.

Charlie’s lounge has a solid wood floor, a sofa where his dogs often make themselves at home and a burner in the hearth.

There is exposed brickwork and a flat screen TV mounted on the wall, while at Christmas the main fire roared adding to the festive feel of the property.

The actor has played lawyer Imran Habeeb in Corrie since 2017 but has now decided to move on.

A source said: “Charlie’s loved his time on the soap but the time is right to try new things.

“He’s hugely talented and very ambitious and wants to see what else is out there.

“He will always cherish his time in Weatherfield but for now it’s goodbye.”

Actor Charlie will film his final scenes in the coming months.

His exit will play out later this year over the summer.

Insiders have promised a spectacular exit storyline for Charlie.

Viewers have watched recently as Imran has proposed to partner Toyah Battersby in an effort to adopt their foster daughter Elsie.

Imran had previously confessed to sleeping with a stranger behind Toyah’s back during Seb Franklin’s murder trial.

Fans know he actually slept with Abi Franklin but Toyah has no idea.

Next week Abi will spiral out of control as she discovers that husband Kevin Webster is done with her for good.

She will relapse and end up collapsing in agony while with her dealer.

Rushed to hospital, Abi will face an agonising decision.

But will she be tied into Imran’s exit from the cobbles? And will she destroy his life like she has her own? What is Celebs Go dating’s Alison Hammond’s net worth and when did join This...