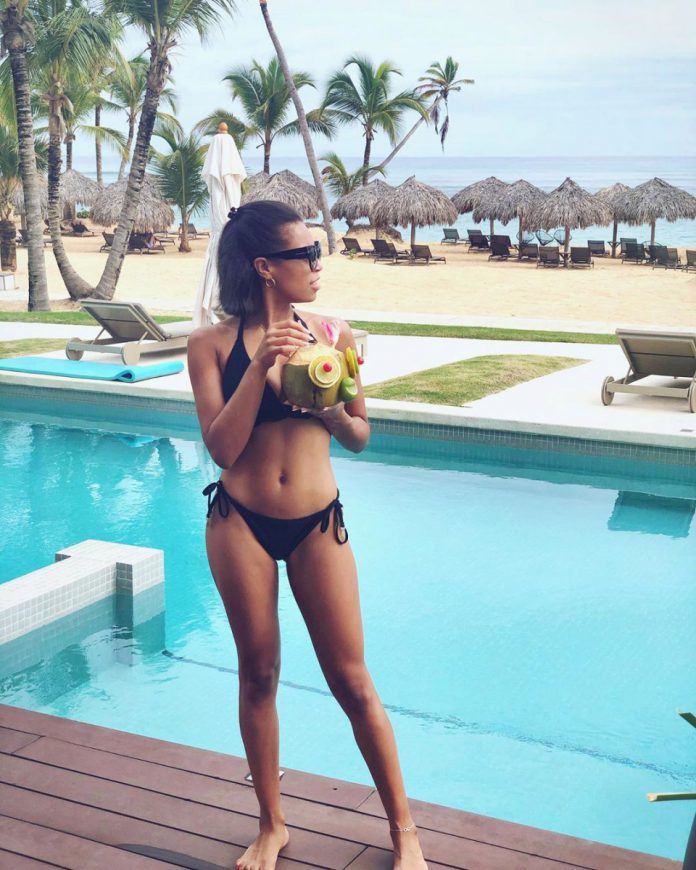 ALAN Halsall and Tisha Merry have jetted off to the Dominican Republic for a romantic getaway.

The two have taken to Instagram to show off their amazing stay at the Excellence El Carmen resort on the east coast of the Dominican Republic – which costs a whopping 1674 per night.

Tisha, 26, who previously played Steph Britton on the popular ITV soap, has uploaded an array of fabulous snaps which would make anyone jealous.

The actress is normally used to the rainy British weather so it’s inevitable that she can’t handle the Carribean heat – and neither can her hair.

“Day One and the humidity got me,” she captioned a picture of her posing in her apartment bathroom in a classic all black bikini and robe pointing at her hair.

The lovebirds have been indulging in lavish food and drinks, including a pints of refreshing Baileys and eating out every night.

The YouTube star, who has 6.77k subscribers on her channel, thanked all her followers for the advice about what she should use to keep her symptoms of prickly heat with a bikini snap in a black two piece costume.

Alan, who is most well-known for his role as Tyrone Dobbs in Coronation Street, also took to his social media account to display his amazing view.

Having been on the resort two days, the two have got up to a lot already, including a lot of indulging in a lot of amazing food and drink and even meeting a pair of flamingos.

Before they admitted that they were dating, Alan and Tisha would regularly grab lunch together after a training session at the gym – and all that hard work has certainly paid off.

The 27-year-old has posed for various snaps of her in a simple black bikini, sipping on huge cocktails to showcase her amazing toned physique.

The Coronation Street stars decided to finally admit that they were official in May last year after months of denying that anything was going on between them.

Tisha was all smiles during her stroll along the beach

The soap stars uploaded a candid snap of the two at Corrie star Sam Aston’s wedding to reveal all to the world.

“You’re not a bad +1 I suppose,” Alan captioned the post.

Numerous rumours had spread that the two were dating after being spotted out together at various events and dinner dates.

They were even spotted together watching the Salford Red Devils at AJ Bell Stadium – but still hadn’t confirmed their relationship.

When the pair aren’t going for romantic strolls together on the beach, sipping on cocktails and sunbathing, Alan and Tisha can relax in his 750,000 dream home that he built with his ex wife Lucy-Jo Hudson.

Alanmoved Tisha into his family home that she shares with his daughter Sienna in September 2019.

A source previously told HOAR Online: Tisha is keeping her place on for now but shes living at Alans place full time.

“She has been so good for him and really made him smile again. They are very similar and love to work out together so they have lots of the same interests and Sienna adores him.

As Nicole Scherzinger, 41, looks better than ever we reveal her body secrets...