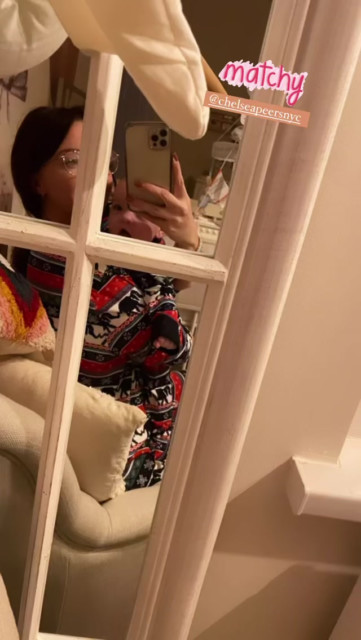 The 32-year-old, who plays Ruby Allen in the BBC soap, gave birth to a 6lb 5oz daughter in August.

Louisa and fiancé Ben Bhanvra doted on Aura while celebrating on Christmas Eve because the actress had waited for her baby’s first festive season for a ‘long time’.

The star shared her excitement about the big day on her Instagram stories.

Louisa wrote over an image of colourful balls: “We are having our ‘Christmas morning’ tomorrow (as we won’t be home Xmas day) currently prepping like Aura knows what’s going on….

“Because I’ve waited for my first Christmas morning with my baby for a long time.”

She then showed how she was “matchy” with baby Aura in identical Chelsea Peers Christmas pyjamas.

Louisa held her baby for a mirror selfie while wearing the striped PJ sets, with printed elephants and festive decorations across them.

“Even daddy got involved,” she wrote and shared a picture of fiancé Ben rocking the same PJs and entertaining Aura with one of her soft toys.

Even though the actress relished her first Christmas as a mum, she recently revealed she’s keen to have more kids.

She told the Sunday Mirror: “I’m an only child so I’ve said I’d like more than one. Ben has two siblings, so he’s always said three or four, although I don’t think that’s going to happen!”

But her fiancé Ben insisted: “We’d definitely like another one at some point but we’re not thinking about that just yet.”

Louisa was in labour for three days before having to have an emergency C-section.

Despite originally planning for a water birth, she was just relieved to have delivered her baby girl safely.

It followed a tough year for the couple who were forced to cancel their wedding twice due to coronavirus.

Looking to reschedule, Louisa said: “We want to get married next year. We’re planning to have the wedding abroad and we’re going to do something smaller than we originally planned.

“It will be different now she’s here. We’re a family now, so it might not be as wild as it was going to be. But we can’t wait to get married.”

Ben popped the question in the Maldives back in 2019  – but when they put their wedding on hold, the pair tried for a baby instead.

Fiancé Beh Bhanvra also got in on the matching action The actress is keen to start for another baby soon Immigration Where do Labour, Conservatives and Liberal Democrats stand?