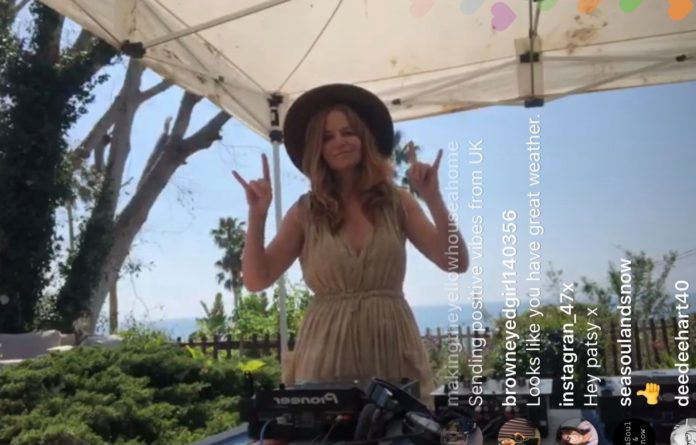 PATSY Palmer entertained fans last night with a DJ set on Instagram as she showed off her stunning Malibu home.

The mum-of-four gave fans a glimpse of her incredible life abroad which is worlds away from her on-screen character Bianca Jackson.

Going by her Instagram videos, Patsy, 47, made the right decision moving to Los Angeles after Bianca left daughter Tiffany back in Albert Square.

The actress positively beamed as she entertained fans in her beautiful garden that overlooked the ocean.

Patsy headed stateside in 2014 with cabbie husband Richard Merkell to raise their kids Fenton, 19, Emilia, 18, and Bertie, nine in the US.

The star turned to DJing in Malibu for fun and as a way to make new friends. She showed off her new skills behind the decks on Instagram, dancing and singing along to disco tunes in the sunshine.

Wearing a linen dress and a wide brimmed hat, the actress chatted away to fans who joined her in the live stream.

Patsy and her cabbie husband Richard Merkel traded in life in Blighty for Malibu six years ago and have never looked back.

The red headed beauty quit acting in 1999 to “spend more time with her family and pursue other projects” and began home schooling her three youngest kids. Patsy music equipment in her garden Bertie does his homework in the stunning Malibu setting The family set up quite the inner circle of famous friends in the Californian sunshine through Patsy’s passion for empowering women.

Even her brood hang out with the offspring of superstars.

Fenton is a model signed to The Dragonfly Agency and is rumoured to be dating Real Housewives of Beverly Hills star Lisa Rinna’s daughter Delilah Belle. Her Instagram is a shrine to her kids, including Emilia, 18 While his ex is said to be Cindy Crawford’s daughter Kaia, who is good friends with Hollywood royal Kendall Jenner.

Meanwhile, Emilia is also becoming a face on the modelling scene as the LA-based teenagers focus on their careers.

EastEnders legend Patsy said about her kids last year:  “They don’t really like school anyway, I hated it when I was a kid, so I’m never going to push them. In honor of all the amazing female artists .. @therealmaryjblige .. dreams come true

“They’re very creative – I feel like there’s a lot more they could be doing outside of school, anyway.”

Instead of school, the kids study classes online so that they can have the flexibility to attend acting lessons and auditions.

Patsy added: “It’s so far to go anyway. If they have a casting in the day it’s going to be hard for them to get there.”

Patsy’s eldest son Charley Palmer Rothwell – who Patsy had with former boyfriend, boxer Alfie Rothwell – lives back in London and is a rising star on the big screen, having bagged decent roles in iBoy, Dunkirk and opposite Tom Hardy in Legend.

#nationaldaughterday I love my girl … @emiliamerkell she is everything and more than I could ever wish for .

Despite her return to the Square, Patsy had admitted in the past that her new LA lifestyle meant she “didn’t miss” acting at all.

She added: “I don’t miss it one bit. I love talking to women, being around women, women that want to support each other.”

Her Instagram is littered with inspirational quotes as she told fans last month: “Take a break people… Book a massage .. have some reiki .. meditate .. Have a relaxing weekend people .. namaste”

EastEnders actress Emma Barton reveals shes single in real life because she has the...

Meghan Markles friend ordered to remove damaging photos of the duchess she was using...