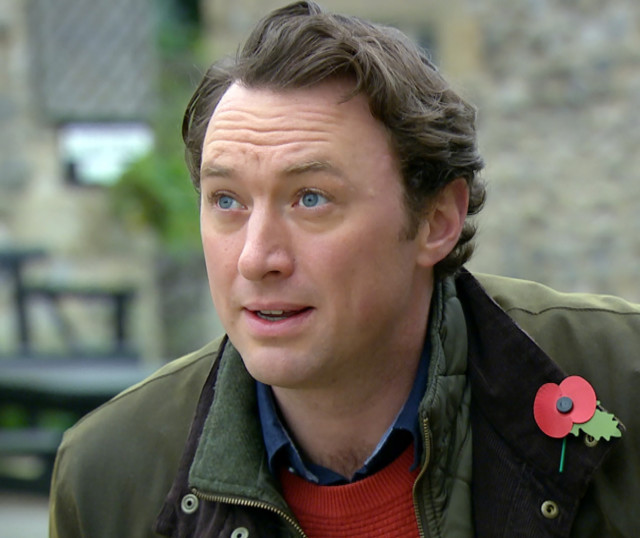 But when cameras aren’t rolling the 39-year-old leads a very different life on the water on a 60ft narrowboat he shared with his dog Molly – and a heron called Keith.

The star, who has been in a relationship with Moira Barton actress Natalie J Robb since last year, has given fans a glimpse into his life on social media.

He has shared pictures of his wonderful boat, Benedict, which he moors near the Emmerdale studios in Leeds, Yorkshire.

It has a cosy kitchen with pots and pans hanging from the wall, an ornate lamp and a partially-stocked wine rack.

One shot shows his collie lurcher Mollie snuggled up on a blanket in the seating area, which is beside a wood-burning stove.

In reality, actor Jonny McPherson has a peaceful home out on the water Another picture of her sees the adopted pet snuggled up on his duvet, with the caption: “Found this in my bed this morning. Any takers?”

Speaking about it on This Morning this week, Jonny explained: “Three and a half years now I’ve lived on Benedict, which is a 60ft narrowboat.”

Asked about the local wildlife by host Holly Willoughby, he said: “Keith is a resident heron at the dock where I’ve got the boat permanently moored now.

“He struts by the window most mornings, peering in at me as if I’m the weird one. He’s a lovely fellow.” Jonny, seen here on Zoom, is in a relationship with Emmerdale co-star Natalie J Robb

Jonny and Natalie were revealed to be dating in June last year when they logged in to a Zoom call to celebrate co-star Liam Fox’s 50th birthday – meaning they must have been isolating together.

Speaking about the romance on Loose Women she explained: “Our first date was in mid-January, and then we were just having a couple of dates in February and then obviously March lockdown happened.

“And we were together at the time that Boris Johnson announced it. He said of the 46-year-old: “We are just shy of a year and it’s still early days but we are having a lovely time.

“I have learnt so much from Natalie. She has been working on TV since she was knee high. We both love the work so much, we spend whole evenings discussing scripts and learning lines.”

Jonny, who was born in London, has popped up in Emmerdale as Dr Liam from 2014 but became a recurring character in July 2018.

He is now set for a huge storyline as it appears there are some obstacles standing in the path of his marriage to Leyla – not least David Metcalfe and the return of his ex Bernice Blackstock.

Samantha Giles‘ character, one of the soap’s most popular characters when she was last in the Dales two years ago, is set to return this summer.

Did you miss our previous article…
https://www.hellofaread.com/soap-opera/eastenders-spoilers-karen-taylor-devastated-as-she-receives-a-vile-note-as-bailey-remains-missing/

Nick Cannon reveals he’s ‘CELIBATE’ after 8th child as he ‘had to get his...