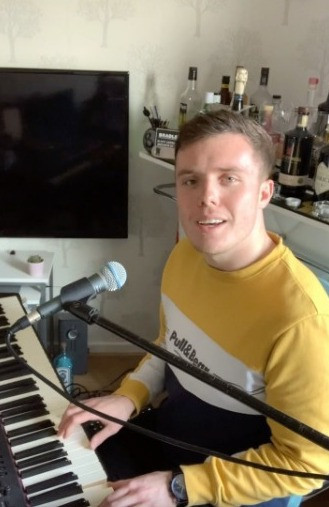 EMMERDALE star Bradley Johnson has been giving fans a glimpse into his home life as he continues to entertain them with his stunning singing voice.

Bradley who plays Vinny Dingle on the soap has been performing covers for his 3,000 Instagram followers.

He has also shared snaps of his cosy home on his Instagram stories.

Fans got a glimpse into his sleek, colour blocked abode complete with black and white flowered wall paper.

The grey feature wall perfectly matched the darker grey carpet and sat behind a modern black electric fire place, which was adorned with photos of his family.

A very cute feature of Bradley’s Insta stories was his grey and white pooch who was snugly wrapped up and asleep on a dog bed. Vinny is known for his iconic eyeglasses Bradley has starred on the soap since 2019

The cute puppy called Barney came into the actor’s life in February with Bradley describing him as “man’s best friend”.

Bradley has been treating fans to covers of different songs every day including, Rick Astley’s Never Gonna Give You Up and Oasis’ Champagne Supernova.

Fans could not believe how different he looked without Vinny’s iconic eyeglasses.

One Twitter user wrote: “Blimey. He looks normal without the daft glasses!” Another said: You look so different without the glasses

The actor has been performing the covers solo while playing an electric keyboard set up in front of a fully stocked bar.

One video was a fun cover of Amy Winehouse and Mark Ronson’s song Valerie which saw Bradley playing the bass and singing at a microphone, then edited together.

In a further attempt to keep fans entertained during the coronavirus lockdown, Bradley is kicking off The Woolpack Sessions on Thursday April 30. Named after the Emmerdale pub, the weekly concerts performed by the soap stars will be aired on YouTube.

“Everyone loves a good sing song and I will find any excuse to get the piano out. Hopefully people will like it and it will entertain them. I hope everyone is staying well and staying safe,” he told Radio Times.

For those who know Bradley outside of the ITV soap, they won’t be surprised by his amazing singing voice.

He was a finalist in BBC1 talent search show Let it Shine in 2017. He got his puppy Barney in February

Bradley impressed with his singing Bring Him Home from the musical Les Miserables.

The actor and singer also starred in the third series of Kay Mellor’s The Syndicate.

He played Noah Stevenson in four episodes before getting his break in Emmerdale.

Government’s Afghanistan helpline is leaving people on hold for up to FOUR HOURS, MP...

Fed-up voters urge Boris to get Brexit done and put the great in Great...

Women who put breast cancer checks on hold during lockdown urged to ‘see your...

Ant and Dec reunite after three months apart in lockdown as they record for...