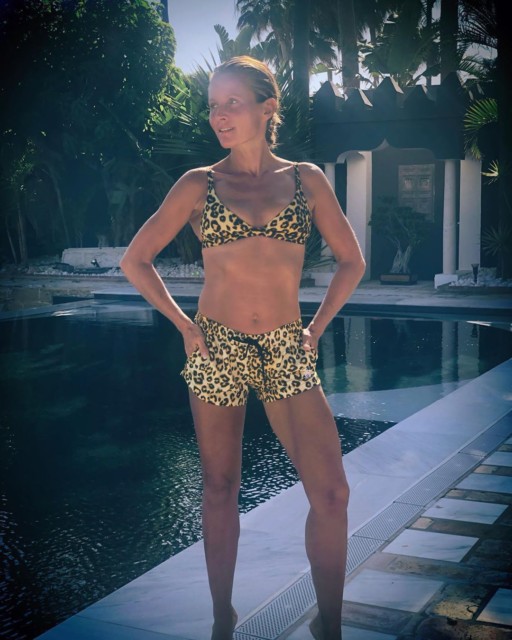 HOLLYOAKS star Davina Taylor has been living her best life in her Marbella villa over the past three months in lockdown.

The soap actress – who played Jude Cunningham in the show from 1996 to 1998 – has been living part time in the Spanish city and has been renovating her lavish holiday home.

Davinia loves to keep her 52.8k followers up to date with what she’s doing on Instagram – and that has meant that she’s given a glimpse into her gorgeous family pad.

The actress, partner Matthew Leyden, and her four kids have been isolating in the amazing property which has a huge pool in the luxury garden and a sea view.

The inside of her home follows an all white interior and her living room has an amazing crystal chandelier hanging from the ceiling.

Another rooms boasts a flat screen TV on the wall and lavish marble flooring. The view from their garden is absolutely breathtaking The house follows an all white interior and features marble flooring Davinia can work out in the comfort of her own home Davina has been working up a sweat in her personal gym, which is kitted out with her own running machine and weights.

Despite having a picture-perfect home, the star has been renovating it over the past few weeks and has shared various videos and snaps of the transformation.

In a recent Instagram post, she wrote: “Update on the villa !! Work continues…its my own fault for nagging for years that I wanted it doing and he finally snapped during lockdown!!!

“But positive is Matthews Spanish is coming on a treat albeit with an Oldham accent !!!” Despite the missing bricks, the view is still amazing The mum-of-four recently reunited with her son Grey, 12, after being apart for four months due to the coronavirus pandemic.

She couldn’t cotain her excitement at the prospect of seeing her eldest child as she revealed she was heading to Barcelona to collect him.

Davinia was ecstatic to be reunited with her son Grey, 12, who she shares with ex-husband Dave Gardner.

After seeing Grey for the first time time in four months the proud mum wrote: “FINALLY!” on a photo of him. The loo-roll heiress revealed to fans that Grey was coming back with her to see his three younger brothers and meet the new dogs.

Davinia also has sons Luxx, nine, whose father she has never revealed, and Asa, six, and four-year-old Jude, with her partner Matthew Leyden.

The fit mum recently revealed how she had gone from a size 16 to a size 8 and showed off the dramatic before and after photos.

Flaunting her amazing weight loss she revealed it’s all thanks to “biohacking”. The star has been using ‘biohacking’ to lose weight

In a lengthy caption on the Instagram post she described how she managed to not only lose the weight but also to keep it off.

all these protocols have helped me stay mentally healthy and if I do that the body follows suit !!!

“Think I’m pushing a size 16 there and then I’m down to an 8 (and maintained it for years !! No yo-yo or massive cravings either ) “All beings in the brain #brainhealth #goodfats #lowsugar #paleo.”

Who do you want to be the next PM? Have YOUR say as Liz...

Pen Farthing accused of ‘trying to jump to the front of the queue’ over...