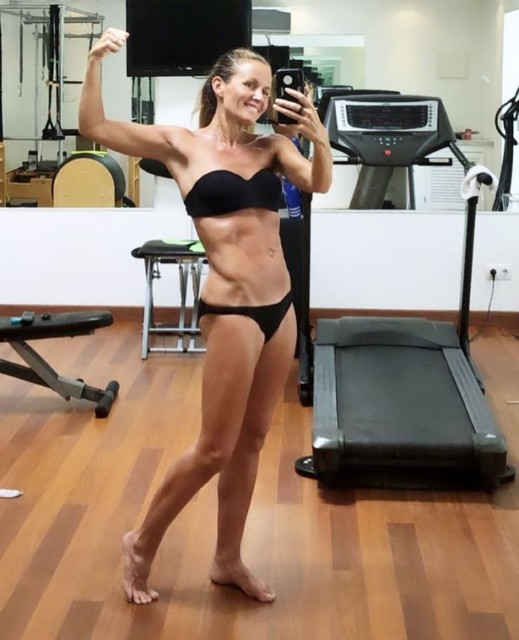 DAVINIA Taylor has revealed how quirky diets and freezing showers have been responsible for her incredible weight loss.

The actress, who is the daughter of multi-millionaire businessman Alan Murphy, shot to fame in the ’90s playing party girl Jude Cunningham in Channel 4 soap Hollyoaks.

The soap star, 42, has revealed how she has dropped a whopping FOUR dress sizes, going from 16 to a petite size 8.

She revealed the secret to her success was understanding her own genes by “biohacking”.

By doing this she’s been able to take steps to craft a targeted diet, exercise and supplement regimes, as well as curious treatments such as “cold exposure.”

“What a difference a bit of #BioHacking makes!!!” the star wrote. Dutch athlete Wim Hof is renowned for his capacity to withstand freezing temperatures.

She also shared a ‘before’ photo and wrote: “Think I’m pushing a size 16 there and then I’m down to an 8 (and maintained it for years!! No yo-yo or massive cravings either).”

Meanwhile, Davinia has previously opened up about her alcoholism and how she has switched to a healthy lifestyle She likened being an alcoholic to “being taken over by a parasite”.

Last year she celebrated 10 years of sobriety, but used to be a staple part of the Primrose Hill party animals, which also included the likes of Sadie Frost and Kate Moss.

Davinia battled both her alcohol addiction and depression, admitting that she was originally in “complete denial” that she had a problem.

The star explained to Hello! magazine: “I thought if everyone just left me alone and I could have a drink, I would be fine. “There wasn’t an aha moment. It was much tougher than that. The first ten months were harder than the past ten years.”

She continued: “Every single cell in my body was telling me to take a drink.

“It was like being taking over by a parasite and the only thing you can do about it was to go cold turkey.

Despite drastically overhauling her lifestyle in that time, the mother-of-four revealed that she is still in touch with some of the famous pals she hit the headlines with in the early noughties – including Sadie and Meg Mathews.

She shared: “Most of that group were ‘going-out’ friendships.

“We have all moved on – although I am still very good friends with Meg and Sadie.”

After beating alcoholism, Davinia understandably admitted that she doesn’t like to go out much any more, and instead has committed herself to fitness.

Did you miss our previous article…
https://www.hellofaread.com/soap-opera/coronation-streets-tragic-storyline-on-mitochondrial-disease-will-help-shine-a-light-on-the-rare-genetic-condition/

Brits will ‘inevitably’ have to fork out more tax to pay for coronavirus, Tony...