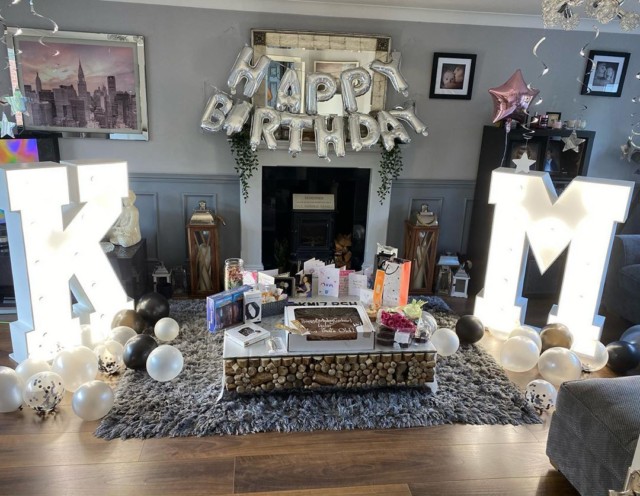 The ex Coronation Street star was treated to the full works from her soldier boyfriend Scott, who she has been dating for almost two years.

The glamorous shared photos of her living room decked out with giant letter lights, happy birthday balloons and floating stars.

On the coffee table in front of her swish fire place was a table overflowing with goodies, including a huge chocolate birthday cake and a mini box of chocolates, flowers and bags of presents.

The star shared a picture with Scott and said: “Well what a surprise for me this morning!!!

“Can’t believe what my gang have done for me to make me feel special on my lockdown birthday!! Times are crazy right now and I am so grateful to have people in my life that make everything feel normal and who never fail to make me feel loved, happy, safe, appreciated and special.

“Thank you from the bottom of my heart my wonderful family, boyfriend and friends. I am emotional and feel so loved! I love you all” Kym got dressed up with her army beau, who looked dapper in a blue suit

Kym moved into her stunning £500,000 home in Warrington, Cheshire towards the end of 2018, and the former Coronation Street star has spent the past year turning it into a cosy masterpiece.

The actress regularly shows off her incredible house on social media, giving fans an insight into her velvet interior, huge fireplace, and quirky pebble coffee table.

She lives there with Scott and her son David, 25, and Polly, nine, while Kym’s daughter Emilie and her one-year-old grandson Teddy are regularly seen relaxing in the house. Just last week, Kym showed off David’s brand new bed as she revealed that he’d been sleeping in the same one for 10 years.

Her proud son could be seen sprawling on top of the mattress with a plush velvet headboard backed onto his grey brick-look wallpaper.

The bed is similar to Kym’s own, with the former Hear’Say singer also opting for an attention-grabbing headboard as she adorned her bed with silver, grey, and black sheets and throw cushions. Kym’s own bed is similar to her son’s The star’s home is always full of her loved ones

Velvet is a theme throughout Kym’s house, with the star also sharing a snap of her son and his girlfriend holding hands as they relaxed on a comfortable grey velvet corner sofa, with french doors leading to the garden in view behind them.

She also has grey tones in the living area, with an arty glass table full of stones and pebbles placed on top of a fluffy grey rug.

A large fireplace can be seen behind it, with several candles giving the room a cosy feel. The quirky pebble coffee table is an eye-catching centrepiece She also showed off her swish TV cabinet The actress’ mirror selfies have her comfortable bed in shot

Kym also has plenty of toys for little Teddy scattered throughout the house, with the little boy beaming as he enjoys quality family time with his grandma in a selection of snaps.

Another photo shows off Kym’s huge kitchen, which features spotlights in the ceiling, sleek white cabinets, and a black granite worktop.

There is a huge island in the middle of the space that is perfect for social gatherings, and Kym has accessorised with sweet personalised touches including a candle engraved with her name. The star has muted tones throughout the incredible home There are several personalised touches This candle has Kym’s name on it The kitchen is a hub for Kym’s busy family

Kym shot to fame 2001 after landing a place in the band Hear’Say on reality show Popstars.

She released a solo album in 2003 before turning her hand to acting, securing the role of Michelle Connor on ITV soap Coronation Street in April 2006.

Kym left the soap last year, with her final scenes airing on the 27th of December 2019. Love Island fans convinced Callum is a game player as he wipes off Shaughnas...

Meghan Markle’s half-sister vows to sue her for ‘defamation’ after bombshell briefings to authors...