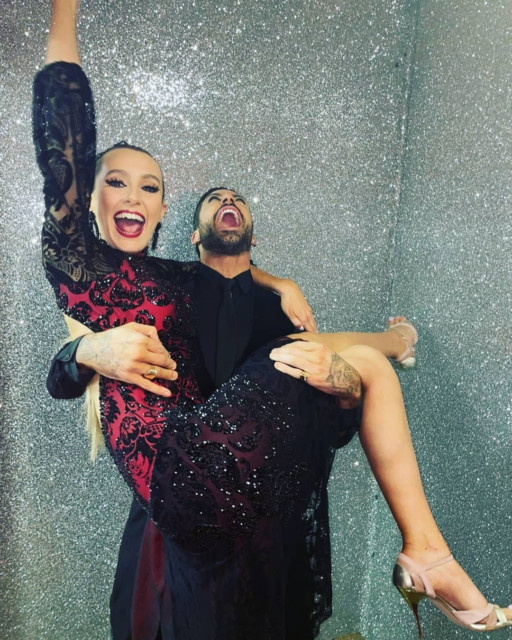 ROSE Ayling-Ellis felt as though she was having an out of body experience when she was announced as the ‘Strictly Come Dancing’ final winner on Saturday night.

The ‘EastEnders’ actress and her professional partner Giovanni Pernice beat John Whaite and Johannes Radebe to lift the glitterball trophy and Rose admits she couldn’t quite believe it when she discovered she was the 2021 champion.

In an interview with The Guardian newspaper, she said: “I was so shocked. It was really weird – it felt like I was out of my body for a moment.

“We celebrated. There was a bit of prosecco, and dancing.”

Rose, 27, paid tribute to Giovanni, 31, for all his support during the series, and praised him for his patience teaching her how to dance and adapting his methods to accomodate her hearing impairment.

The actress – who has been deaf since birth – said: “Giovanni has been incredible.

“There are a lot of ups and downs and some dances are harder than others. But Giovanni is such a good teacher, and he’s really adapted to the way I learn, rather than making me learn it in his way.”

Rose – who was able to Bluetooth music directly to her hearing aids to assist her in rehearsals – admits the entire ‘Strictly’ experience has been “life- changing” and she hopes her win shows that “deaf people can do anything”.

She said: “It has been life-changing. I try not to think about it ending too much because it makes me feel really sad.

“But I definitely proved a lot of people wrong … What is more important is breaking the barrier, proving that deaf people can do anything. I feel that I’ve achieved that.”

Rose’s rarely seen boyfriend, Samuel Arnold, made his studio debut as he burst with pride supporting his soap star love over the weekend.

Sam jumped for joy as Rose was crowned the winner of the 2021 series alongside Giovanni becoming the first deaf person to win.

The EastEnders star has tried to keep her personal life out of the public eye, and could be the reason why Sam did not appear in the Blackpool studio before the final.

Rose and Giovanni celebrated with prossecco and ‘a bit of dancing’ Giovanni also took the Glittberall trophy to bed with him

Did you miss our previous article…
https://www.hellofaread.com/soap-opera/coronation-street-fans-are-all-saying-the-same-thing-about-emma-and-mum-fiona-after-emotional-wedding/

Rishi Sunak vows his ‘mission’ is to cut taxes for millions of Brits as...