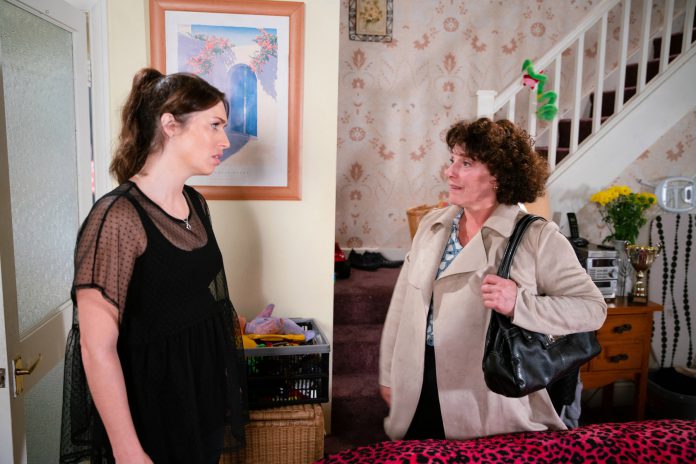 CORONATION Street fans will have noticed that Shona Ramsey has been hiding a growing bump in recent episodes on the ITV soap.

But while Shona isnt actually pregnant, the actress who plays her Julia Goulding very much is.

The Coronation Street star revealed back in May that shes expecting her first child so shes doing a great job of hiding her baby bump on screen.

The newly married actress, 34, is expecting a baby with her husband Ben Silver after they tied the knot in February.

She told fans: “Ben and I are delighted to announce that we are expecting our first baby at the end of this year!

“We are absolutely overjoyed and cant wait to meet our little one!”

Julia has played Shona Ramsey in the ITV soap since 2016.

Her husband Ben – who is a teacher – popped the question after three years of dating.

But the pair decided to keep their happy news private for ten months.

Julia admittedBen had to plan their wedding because she doesn’t get a “moment’s rest”because of Coronation Street’s hectic filming schedule.

Luckily, everything went according to plan and in February they got married at Manchesters Albert Hall.

Ben toldOK! Magazine: “As soon as I saw Julia, I just knew it was the best day of my life.”

Julia’s Corrie colleagues have been sending their congratulations.

Lucy Fallon shared love heart emojis, while Samia Longchambon, who plays Maria, said: “Whoop!! So happy for you both Jules!”

It was also revealed back in July that Julia was only planning on taking four months maternity leave.

Her Corrie co-star, Jack P Shepherd, revealed the news of Julia’s baby break – and hinted their characters David Platt and Shona Ramsey could marry before she goes.

He told Inside Soap: “Julia’s off for four months but we may cross over on screen when David gets out of prison.

“I’d like them to have a massive wedding, although I doubt that will happen, as they don’t have any money now that David’s given his nan the barbers.

“Shona doesn’t make much at Roy’s. I imagine it will be a registrar down the at the town hall or the bistro.”

As Nicole Scherzinger, 41, looks better than ever we reveal her body secrets...