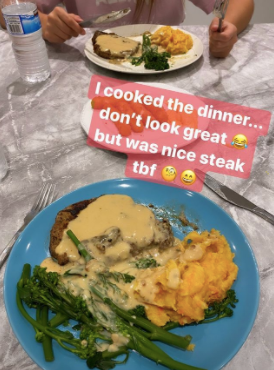 JACQUELINE Jossa was treated to a steak dinner made by her husband Dan Osborne last night after he agreed to her ultimatum to save their marriage.

The ex-EastEnders actress tucked into a romantic meal as they spent their first Saturday evening together since Jacqueline returned to the marital home.

HOAR revealed Jacqueline, 27, ordered Dan to focus on her or he’s out for good, having walked out following several bust-ups during lockdown.

Former Towie star Dan, 28, begged Jacqueline to come back and she accepted – if he stops his infatuation with glamorous female reality stars.

Jacqueline left their £1million home after she found he had sent a flirty message to Love Island star Gabby Allen who he was famously pictured flirting with on a yacht with.

Love cheat Dan contacted Gabby, 26, last month but she did not respond. A pal told HOAR: “Dan insists he has done nothing wrong but Jacqueline is frustrated he can’t just focus solely on her and thinks he has been communicating with other girls.

“She remains suspicious as she has caught him out before and he has form for being pictured chatting to attractive female celebrities at showbiz parties when she’s been at home or working.” Jacqueline admitted to fans she needs “breathing space” but would be moving back home part-time.

It’s after she told Dan she wanted a six-month break from their three-year marriage.

She has been living in a new house owned by her parents with their daughters Ella, five, and Mia, 22 months. Our source added: “Jacqueline’s back now after Dan begged her to come home and he’s going to get another chance to prove his loyalty to her.

“Her friends cannot understand why she keeps going back to him but she’s just so in love — and knows they make a great team, despite the fact they fight non-stop.

“She really missed him — and they barely spent two days apart.”

The mum of two told fans she was giving things another go with her husband after their split, but admitted they’ve still got “stuff going on”.

“Not that it’s got anything to do with you, but was going to let you guys know I am back at home,” said Jacqueline.

While Jacqueline was in the jungle, her fellow campmate Myles Stephenson told her something had gone on between Dan and his ex Gabby Allen — who Dan had been pictured getting cosy with on a yacht in Majorca in April 2018.

Myles’s claim triggered a mini-meltdown which wasn’t shown on TV, and in an I’m A Celebrity first, Jacqueline was allowed to contact Dan, to confront him about the claims, which he again publically shot down.

Dan, who has a six-year-old son, Teddy, from a previous relationship, will be on extra good behaviour now Jacqueline has her parents’ home nearby where she can escape their rows. Boris Johnson says we ‘must face the reality of regime change in Afghanistan’ during...

Deals to buy £5m worth of freezers to store Covid-19 vaccines were struck only...

Love Island and reality shows have duty of care to contestants and presenters, says...