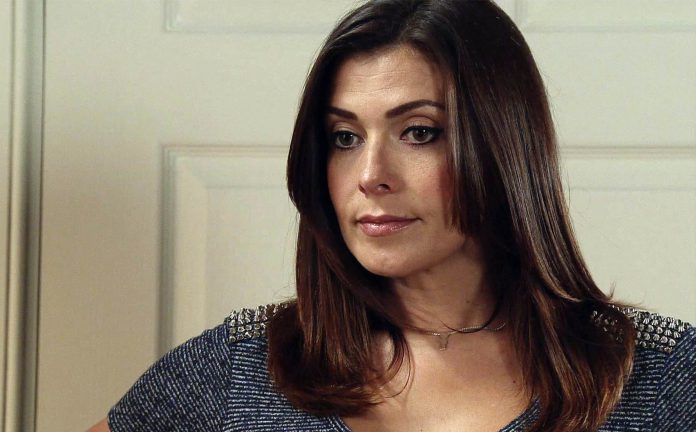 CORONATION Street star Kym Marsh will be leaving the cobbles in the very near future and fans have feared her character may be killed off.

However, the actress has spoken out to confirm that Michelle Connor will not be exiting the cobbles in a body bag – so what is in store? Here’s everything we know about her exit storyline so far…

The exact details surrounding Michelles Coronation Street exit are being kept under wraps for now but that hasn’t stopped fans theorising how she will leave the cobbles behind her.

After months of betrayal, the Rovers Return barmaid is finally due to clock that her fiance Robert Preston has been cheating on her with pregnant Vicky Jefferies.

Fans of the ITV soap have been shocked as Robert has juggled relationships with both Michelle and Vicky behind their backs.

Desperate to stop the women finding out about each other, the restauranteur has weaved a very tangled web for himself – ending up engaged to both of them and fathering Vicky’s unborn child.

But with both Tristan and Kym set to leave the cobbles in the near future, it looks like fans can expect Robert’s downfall – will Michelle be behind it?

Why is Kym Marsh leaving Coronation Street after 14 years?

Speaking on This Morning, Philip Schofield quizzed her as to why she is bidding farewell to Weatherfield.

When asked whether her character would die, she replied: No. The door is open so thats good.

Discussing the reason for her exit, she said: I just thought Id quite like to try my hand at something else. Im always one who loved a bit of a challenge, and so, there you go.

“I just, you know, it comes a time when youre a part of such a huge show and you play that character for so many years,” she later explained.

She confirmed she knows when her final scenes will air but teased: “I do know, probably cant say. But its soon, coming up very soon.”

[It feels] a bit weird, she added. Im going to be very emotional on my last day, for sure.

Halfords to reopen 53 stores for the first time since lockdown as bosses expect...

The chart that shows how coronavirus is killing cash

You can watch Inception and The Prestige for FREE in Fortnite tonight at ‘virtual...