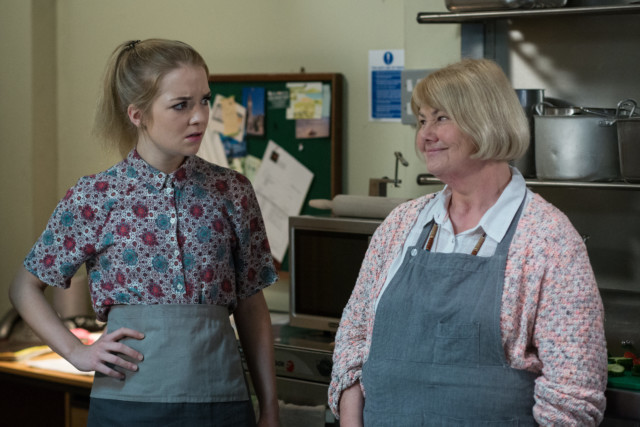 EASTENDERS fans know Annette Badland for her role as Aunt Babe in the Square, constantly causing trouble for the Carter family.

Annette, 71, played the legendary character for three years before leaving in 2017.

But fast forward five years and the actress looked unrecognisable as she picked up a prestigious award from an event across the pond.

The actress stunned in a regal purple wrap dress, paired with black flats and a matching clutch bag.

Annette rounded off the look with her ice white hair in a sharp cropped fashion.

A far cry from the downtrodden style she sported on the Walford soap.

She was joined by other members of the Apple TV+ series Ted Lasso at a London venue after being nominated for Outstanding Performance by an Ensemble in a Comedy Series.

The cast then went on to win the prestigious award.

Annette once revealed she received death threats from fans who thought she really was Danny Dyer’s evil aunt Babe.

The actress ended up speaking to police who gave her advice on how to deal with the fears.

She said: “People did believe I was Babe, which was shocking. It was the first time people didn’t say to me, ‘Oh I can’t remember your name but I liked you in that thing the other night’.

“She ruffled some feathers as the character and the police told me, ‘You don’t tell anyone where you are going. You always have a phone’.” Did you miss our previous article…
https://www.hellofaread.com/soap-opera/emmerdales-samantha-giles-slams-the-soaps-serial-killer-storyline-saying-she-doesnt-watch-it-and-it-needs-to-end/

Princes Charles planned the axing of Andrew in a ‘Game of Thrones’ style move,...