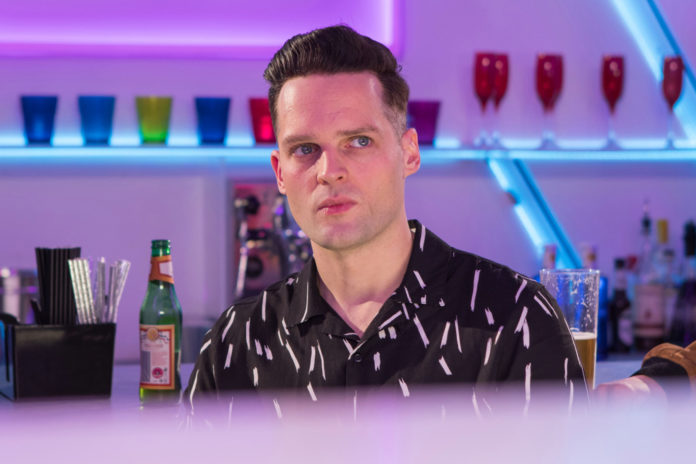 HOLLYOAKS’ leap year trailer teased the moment Liam Donovan gathers his enemies at the Dog for “the devil’s dinner party”.

Viewers know that Liam is on the warpath against Mercedes McQueen and Warren Fox as he tries to shut down her suspicions about the shooting – but who else is he planning on inviting to his twisted soirée?

What is Liam Donovan’s revenge plot against Mercedes in Hollyoaks?

Hollyoaks fans know that Mercedes and Warren have their suspicions that Liam was the mystery assailant who gunned her down last year.

But in an effort to save his sister Grace and ex James – the real culprits – Liam has been threatening Mercedes to shut her up for good.

After tricking Warren into leaving Mercedes alone, Liam got his gang to smash up her pub and business while she watched on in terror.

Liam’s revenge plot is set to escalate in next week’s episodes of Hollyoaks as he tells Mercedes he’s coming for her.

He then sends her a funeral wreath – for herself – to really get the message across.

Aside from the shooting saga, there’s also the possibility that Liam is still stewing in the wake of their toxic affair.

Liam’s pride was wounded when Mercedes chose Sylver McQueen over him.

And he received a further blow when he discovered she had secretly aborted a baby that might have been his.

The leap year trailer shows Liam exposing Grace and James as the ones who shot Mercedes to the landlady herself as he holds everyone hostage during the “dinner party”.

Liam had a toxic affair with Mercedes last year in Hollyoaks

Who are Liam’s other enemies in Hollyoaks?

The recent leap year trailer teased the moment Liam gathers everyone who’s crossed him at the Dog for what he’s calling a “devil’s dinner party” to get his revenge.

Fans know that the villain has been firing arrows at pictures of his enemies stuck on his dartboard since the death of his little brother Jesse Donovan.

But who will be getting an invite to the soiree?

Liam might seem to be protecting his sister and former lover James by threatening Mercedes right now, but the trailer suggests he’ll turn against them after discovering his brother drank himself to death shortly after finding out Grace and James’s shooting secret.

The villain is also understandably bearing a grudge against James for dumping him for John Paul McQueen.

Warren loves a good fight to the death and has been squaring up to Liam ever since he started threatening his girlfriend Mercedes.

The trailer shows Warren sneaking into the Dog while Liam holds everyone hostage, but fans will have to wait and see what tricks he has up his sleeve.

Actor Jude Monk McGowan has spoken out to reveal that his character Liam Donovan is set to massively underestimate his rival Warren Fox as they go head-to-head in a number of explosive clashes over Mercedes.

“Warren definitely isn’t someone you should underestimate – you do so at your peril,” Jude told Inside Soap magazine.

“But I think, initially, Liam totally does that!

With John Paul now dating James, he’s definitely on Liam’s list of enemies as he sets out on his revenge rampage.

Liam loves to hold a grudge and the trailer shows the explosive moment he shoves John Paul into the back of a van before slamming the door shut in his face.

It’s pretty clear that John Paul better watch his back.

Liam blames Maxine for plying Jesse with booze in Hollyoaks

Liam has also set his sights on Maxine who he blames the most for the death of his brother.

Max was serving as a barmaid at his wedding reception and Liam blames her for plying his brother with the booze that ultimately led to his death.

The villain is in the middle of playing mind games with Maxine by pretending to help her out of debt.

In reality, he’s been forcing her into prostitution to feed and clothe her baby in a sick and twisted revenge plot.

The Munchausen’s sufferer – who is played by actress Nikki Sanderson in the ITV soap – is in financial difficulty after she pretended to be dying and received thousands of pounds in support for fake treatment.

Twitch star Novaruu mysteriously BANNED from app and page removed – and no one...