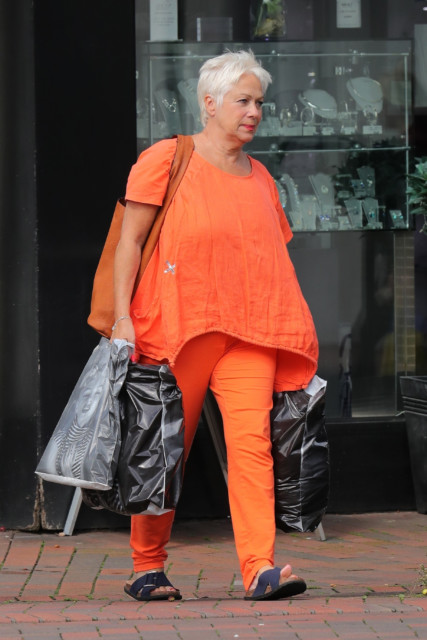 DENISE Welch hit the shops in an all-orange outfit after unfollowing Coleen Nolan on Instagram.

Denise, 62, was easy to spot in Cheshire dressed in the bright outfit following her row with her fellow Loose Women star.

The former Coronation Street star looked fab in the baggy top and trousers that she teamed with orange lipstick and blue sandals.

Hauling her bags, Denise made her way to her car following a successful trip into town on her day off work.

Denise had an eventful week, after she unfollowed her co-star Coleen Nolan after her manager’s rant against Nadia Sawalha.

Backing her pal, Denise shared a snap calling Nadia “the loveliest friend” in a supportive post on Instagram. Denise was spotted out in Cheshire today Nadia had also unfollowed Coleen on Twitter and Instagram, but quickly refollowed her, with her rep insisting they’re good friends and it was a mistake.

But fans later spotted that Denise is no longer following Coleen on Instagram.

One told HOAR Online: “I was shocked as Denise follows Stacey Solomon, Andrea McLean and Judi Love – she follows everyone except Coleen!”

Sharing a throwback snap of her with Nadia, Denise wrote: “One of the loveliest of friends. “Have absolutely zero idea of when this was or where but it was a long time ago!! Love you Nads!!”

She lashed out at 55-year-old Nadia online last week after watching the star speak out against body shaming.

Nadia was seen in the footage urging women to love their bodies, admitting: “Nobody in my entire life has ever said anything as nasty to me as I’ve said about myself.” Furious Melanie shared the video of Nadia alongside an epic rant, where she slammed her “be kind” speeches and accused her of having a “nasty side”.

On Thursday night, Nadia addressed her own followers on Instagram, thanking them for their support. She did not name Melanie in her video. “Not all days are nice. But I have so many lovely messages that I didn’t want it to go left unsaid.

“To my many colleagues that have texted and messaged today, some that I haven’t seen for years, some I have worked with on different shows – to subs to followers, to friends to strangers.

“There are so many more good people than bad people in the world, thank you.”

EastEnders latest LIVE – Soap NOT on TV tonight after schedule shake-up, plus Coronation...