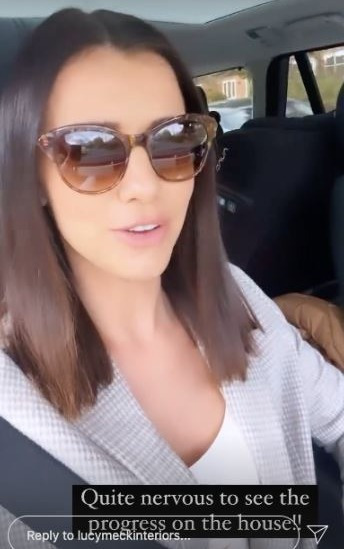 LUCY Mecklenburgh and Ryan Thomas have given fans a tour of their huge new Manchester mansion as they start their million-pound renovations.

The former Coronation Street star, 36, bought the pad without his other half seeing it back in February.

Since then the pair have kept fans up to date with what’s been going on with the property on their dedicated home Instagram account.

The pair headed over to the house to see how things were getting on.

Lucy, 29, told her 338k followers on her special account: “So we’re off to go and look at the new house.

“It’s going to be weird because the last time I was here it was pretty bad. And now it’s been ripped back to bricks, it’s going to look even worse…” The couple met up with their interior designer Rachael Baby Roman tried to get in with all their plans too

Ryan added: “Bathroom needs to be ripped out. That’s the next one.

“The wall’s coming out on Friday for the kitchen dining room. It’ll be nice to see it opened up.”

Lucy continued: “We’ve got a lot to do basically. We are starting near enough from scratch.

“We’re just off to the house now to meet our interior designer Rachael. They’ve ripped out the kitchen

“She’s going to project manage it for us because obviously we’re not here all the time so it’s really difficult to oversee everything. And then she’s also helping me with the fun bit at the end as well.”

When they arrived the fitness fanatic went on to give a tour of the house.

“We’ve got a lot to do basically. We are starting near enough from scratch,” she confessed.

Husband-to-be Ryan seems to have turned into his former alter-ego Jason Grimshaw and is now a builder, as she told fans: “Ryan’s been busy. Roman has a huge bedroom

“He’s ripped all the walls back to brick, we’ve ripped the kitchen out, there is no kitchen.

She then went on to explain that the front room is going to transform into a lovely cozy snug for the family to relax in.

Moving upstairs, Lucy gave a glimpse inside Roman’s future room, their master bedroom until they do the loft conversion and Ryan’s daughter Scarlett’s room.

To finish off the tour, Lucy showed off their future extension plans. Lucy gave a glimpse at one of the upstairs bathrooms They’re planning on converting the conservatory into an orangery

Last week Ryan admitted he’s “still in trouble” with his fiancée for buying the house behind her back.

During an appearance on Lorraine, the host couldn’t help but notice the beautiful kitchen behind him and asked how the renovation plans were going. Lucy and Ryan announced the happy news back in February

Ryan added: “We’re not even in the house, it’s a building site and I can’t see the light at the end of the tunnel.

“Eventually it will be ok… but right now, everyone knows moving house is hard work, but I took more than I can chew with this house.

“But eventually, we’re getting there, we will be happy.”

Lucy announced the shocking news back in February. She uploaded a snap of the pair standing next to their new front door with a mat that stated “home sweet home”.

The beauty told fans: “New house, new project, new memories to be made

@ryanthomas84 bought our new Manchester home without me viewing it

he is a very brave man hahahah!!!

“I’ll be posting the full renovation process on @lucymeckinteriors

EastEnders’ Sharon Watts to be rocked by shock death of her dad Gavin Sullivan...

Who is Callum Jones? Love Island cast member from Manchester