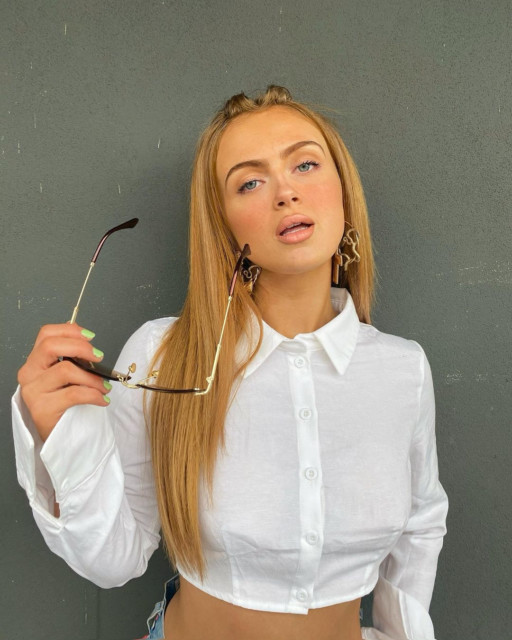 MAISIE Smith is selling off her old sports bras and leggings for as little as £7 after it was reported she’s set to quit EastEnders.

The actress, 19, is flogging her unwanted clothing on social shopping app Depop, with new items added every week.

Maisie Smith is selling her old clothes on Depop

Maisie can be seen modelling each of the items on her account, with 249 sold so far and nearly 4,000 people following her account.

Accessories have the cheapest price tags, with her chokers going from as little as £2.

A keen gym-goer, Maisie has an impressive range of sportswear. The cheapest of which is a plain black sports bra that sold for £7. Other branded items by the likes of Nike and GymShark are priced higher.

Other celebs are also using the app, with Katie Price making thousands selling her old items.

Sports bras have gone for as little as £7 Maisie models the gear on the app

The mum-of-five has built a large following on the site and has sold thousands of items.

This week Maisie was left red-faced when she ended up watching herself on TV while doing a workout at the gym.

She was getting on the exercise bike to do some cardio when she saw her face pop up on the screen in the BBC soap. “So awks when this happens,” said Maisie.

She suggested it wasn’t the first time she’s seen herself on-screen while getting sweaty in the gym.

Maisie shot to fame aged seven after securing the role of Tiffany Butcher on the BBC One soap. She called it awkward

She’s played Tiffany Butcher in Eastenders since 2008, but had a four-year break to try new things.

After appearing in a film called, The Other Boleyn Girl, aspiring singer Maisie also released her first single Good Thing back in 2016.

She rejoined the Albert Square crew full-time in 2018.

Last year Maisie made it to the final of Strictly Come Dancing — won by comedian Bill Bailey, 55. She first appeared on EastEnders as a seven-year-old

HOAR has told how Maisie could earn £1million over two years after being inundated with lucrative offers following her stint on the BBC show.

But to cash in, she would have to quit her EastEnders role because the terms of her BBC contract mean she is unable to accept.

She’s said to be weighing up her options, but sources say she is “incredibly loyal” and likely to stay until at least the end of next year.

Stacey Solomon went back to work at a fish and chip shop after wowing...