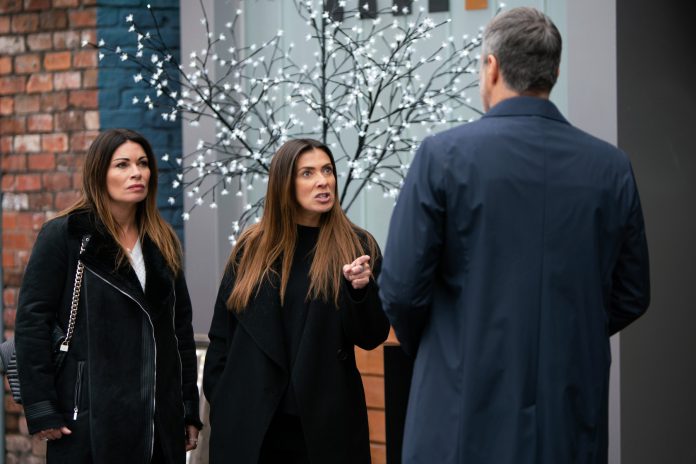 CORONATION Streets Michelle Connor is in for a festive shocker when she sells the Bistro to an anonymous buyer as she plans to make a swift exit from the cobbles.

The feisty brunette has been carefully plotting her revenge against cheating Robert but falls into a nasty trap when she discovers that creepy Ray is the new owner.

What is Michelle Connors shock exit twist in Coronation Street?

Michelle is set to sell the Bistro to an anonymous buyer as part of her revenge plan against cheating Robert Preston in Coronation Street.

And official spoilers have now revealed that a victorious Michelle will march to the Bistro with the intention to hand over her keys to her buyer.

But Michelle is horrified when she realises that the mystery buyer is creepy Ray.

The sleazy hotelier took advantage of his position when he was mapping out plans for a potential franchise for the Bistro for Michelle.

In disturbing scenes, he invited her up to his room and put a hand on her thigh while wearing nothing but a robe.

Michelle is so devastated she breaks down and sets about smashing everything in the Bistro.

When is Michelle leaving Coronation Street?

Kym Marsh is set to leave Corrie after 14 years on the show.

Fans of the ITV soap will know that Michelle is making a swift exit following her discovery of Roberts affair.

The love rat had been two-timing her and pregnant Vicky Jefferies for months, keeping both relationships a secret from the other woman.

But detective Michelle and Carla followed Robert to Vickys and were horrified to see him calling things off with his pregnant other woman.

Michelle was furious but quickly plotted her revenge, agreeing to still go ahead with the wedding.

On the day itself, the former barmaid read out Roberts romantic texts with Vicky to the church congregation, before brutally jilting him at the altar.

She also planned to rob him of the Bistro and sell it on, but this half of her plan seems to be scuppered by creepy Ray.

Whether this momentarily stops Michelle in her tracks remains to be seen.

Has Michelle helped Vicky to frame her death in Coronation Street?

In the wake of their wedding day, Robert is the prime suspect for Vickys disappearance.

Could the desperate cheat have done away with pregnant Vicky to ensure he gets to tie the knot with Michelle – or are the signs he killed her just a bit too obvious?

Fans are convinced that Michelle helped Vicky to stage her own death.

And now they’ve come up with the theory that Robert will find pregnant Vicky Jefferies and hold her hostage after discovering she isnt dead.

Fans will have to tune in to see whether Michelle swoops out of the show before the Vicky drama unfolds.

Chocolate fans are only just realising you can get Quality Street tubs filled with...

Inside Boris Johnson and Joe Biden’s first phone call – from who stole ‘build...